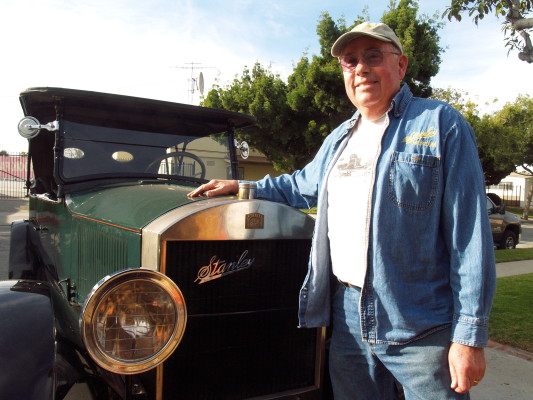 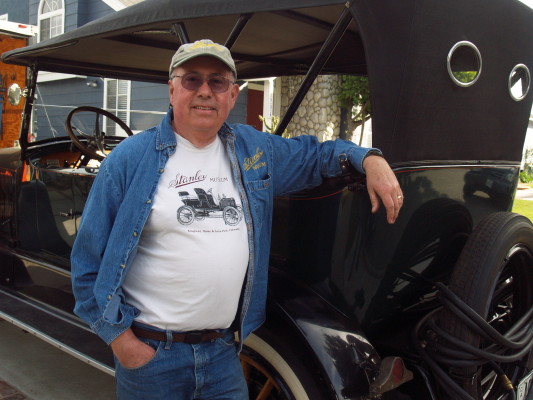 When Ron Schroeder was eleven years old, his father took him to an exhibition of antique steam-powered farm equipment, and he noticed something that was out of place.

“I admiring a steam traction engine and what looked like a Ford Model A went by, but it was very quiet. I went to talk with the owner, and asked, ‘This looks like a Model A, but it doesn’t sound like one.’” He said, “You’re very right, son. It’s a Model A body, but I have a Stanley Steamer driveline under it. Do you want a ride?”

That ride awakened a lifelong interest in steam cars, the Stanley in particular. The cars were built by a company — the Stanley Motor Carriage Company — started by a pair of eccentric identical twin inventors in 1899. Their vehicles were silent and reliable when gasoline-powered competitors were neither, and a custom-built Stanley racer set a speed record, going 197 miles an hour in 1907. The Stanley twins built a variety of models but marketed them ineptly – they didn’t believe in advertising or offering cars in a range of colors, and refused to sell one to anybody they didn’t like. Partly as a result of these practices, the company stopped making cars in 1924.

Stanleys are still on roads around the world, and Ron Schroeder owns two of them. One was built in 1914, the other in 1922, and he turns heads in his Torrance neighborhood when he drives them. He satisfied his lifelong dream of Stanley ownership six years ago, though he had not really thought it would ever be possible.

“I had a bucket list – it included building an airplane and flying it, and I’ve done that, and owning a Stanley Steamer. I’d be able to afford one, since I was saving for retirement, and in the meantime my father was getting older. Every time I saw him he’d say, “I’ll leave you a little something, son.” I said, “Dad, I’ve got a good job and I don’t need money. Go do some of the things you want to do.” He was raised during the depression, though, and he never did. When he passed away six years ago, I had some extra money.”

Ron quickly found a way to spend it.

“Not long after that we were on a vacation in Maine, and I found that there was a Stanley museum in Kingsfield. One of the people there got me interested in joining the museum. In their magazine there was an announcement that they would have a symposium on the cars, and by the way, there was an auction attached to it. I attended, and failed to sit on my hands through the auction. I came home with a 1922 Stanley Steamer, and learned how to operate it, which was a lot of the fun. You’re really dealing with nineteenth century technology here – both steam and the way they constructed things. You find yourself looking at it and wondering, why did they build it this way? And there’s always a good reason once you figure it out.”

He quickly found that there was a worldwide support network for these vehicles that had been built as much as a century ago.

“When I got this car home, I realized there was no safety valve on the boiler. The previous owner had driven it that way for years, but I was a little leery of that. When this car was made, you sent a telegram to Stanley for a part, and it would be delivered by rail some weeks later. I phoned the Gould family enterprise in England, told them what I needed, and they said, “It’ll be in the post tomorrow, you can send us a check.” They’d never heard of me before, but I had it in five days, and could get on the road. That’s pretty characteristic of the kind of people who are in this hobby.”

Ron drives exhibition tours with car clubs all over the country, but was quick to specify that he doesn’t drive all the way from Torrance to events in Kansas or Washington. 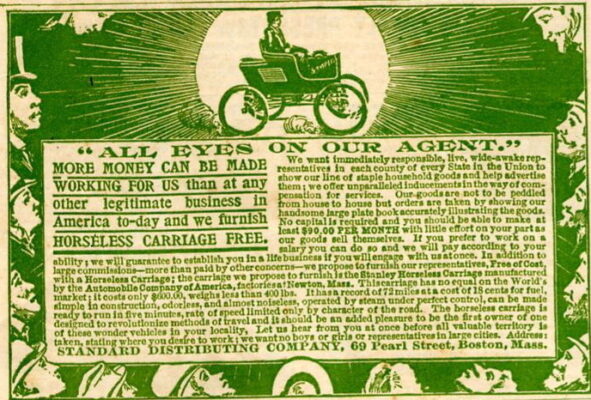 “The car can go hundreds of miles without any problem, but it’s not freeway capable. I can go 50 miles an hour for brief periods, but 40 to 45 on the level is all it can maintain, and if you hit a grade you’ll slow down. The brakes are terrible by modern standards; it’s not a good car for modern traffic… I drive these around Torrance, at least once a month or so and always get some attention. Most people are really excited – they wave, honk, shout ‘What is it,” that sort of thing. Occasionally I get someone who doesn’t like being behind the car that goes slower, gives me the single-finger wave… Most people are fascinated by it, but don’t recognize the limitations of these things. Sometimes they pull right in front of me and hit the brakes, and since these don’t stop that well, it gets exciting.”

There are many ways these old cars are different from contemporary vehicles, some more obvious than others.

“Neither of my cars has bumpers – they weren’t standard equipment. There were aftermarket bumpers available, but my cars are the way they came from the factory. My 1922 has an original plate, and it wasn’t issued by the state of California. They didn’t issue plates back then – they gave you a number and you made your own plate. You can still do that! It gets a little difficult dealing with the DMV, but you can still do it. There’s a guy who makes them the way they did back then, out of leather with stamped metal numbers that he rivets on it, and it looks great.”

After four years of enjoying trips in his 1922 Stanley, it needed an overhaul, which led to a fateful trip. 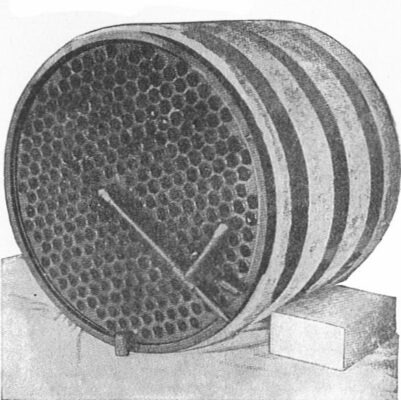 “I needed a new boiler for it, and the manufacturer was in Kansas. He had it ready just as an old car tour was happening there, so I drove out and picked it up. I had a chance to drive a lot of other people’s cars at the show, among them what were called ten-horse cars, which were quick and exciting to drive. It started what I call the potato chip effect – I couldn’t have just one. I found a little 1912 ten-horse and got it. Since then I have found another one that I like a lot, but don’t have a place to put it, and these two are taking up a lot of time already.”

Ron is an enthusiast who appreciates the way steam engines have been built, but a realist about their future. When asked whether there will be a renaissance of steam cars, he sounded like a history professor when he explained.

“There’s a letter that is on the wall of the Stanley Museum in Maine, which I am now a trustee of. It was written by Abner Doble, who developed a very sophisticated steam car of the 1920’s and 30’s – Howard Hughes owned two of them. Late in his life someone asked Doble why there were no modern steam cars, and he answered, ‘Because water freezes.’ When cars like mine were built, they were luxury items, a toy, not something you used to get to work every day or run errands. You drained the engines and put them away for the winter.” 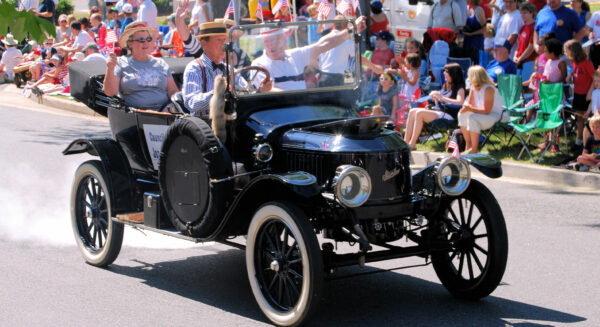 A Stanley Steamer at 4th of July celebrations in Fairfax, Virginia. Courtesy WikiCommons

“When water freezes, it expands, and in a steam car there are all those delicate parts, all those confined spaces, and they break. That’s not much of a problem here in Los Angeles, but a good friend of mine with a similar car went on a tour in the foothills of the Sierras, at a time of year when it didn’t usually freeze. It did, and in the morning his water pump was broken.”

“People keep trying to conquer the problem, and Bill Lear, of the Learjet and Lear Electronics, lost most of his fortune trying to develop a steam car [in the 1960s]. Recently a company raised a lot of money trying to develop a new steam engine, promoting how efficient it was – they disappeared quietly in the night. That isn’t to say steam isn’t still important – both coal and nuclear plants are based on steam, and at the right scale steam is efficient and powerful, but it doesn’t scale down. These cars are very fun to drive, but you don’t get them for efficiency.”

Though Ron doesn’t think there will be a new generation of steam-powered cars, he does enjoy the interest generated by a current literary phenomenon.

“I got a call from the Orange Empire Railway Museum in Perris, and they have what they call the Iron Horse Steampunk Carnivale. It’s a bunch of steampunk people having a good time, so I brought my car there. It’s March 21st and 22nd this year, and I’m trying to get anybody else with steam cars to show up.”

As we were winding up the interview while standing in the driveway next to the 1922 Stanley, Ron’s wife Sherry showed up, and I had to ask what her first reaction was when her husband said he wanted to own a Stanley Steamer.

“He’s out of his mind,” she responded instantly.

And has she changed that opinion?

“I do love it now… I grew up in construction, and I like the tractors he likes. If I’m honest, I enjoy it, but I have to tease him.”

And so domestic harmony drives the streets of Torrance, accompanied by a gentle hiss of steam.