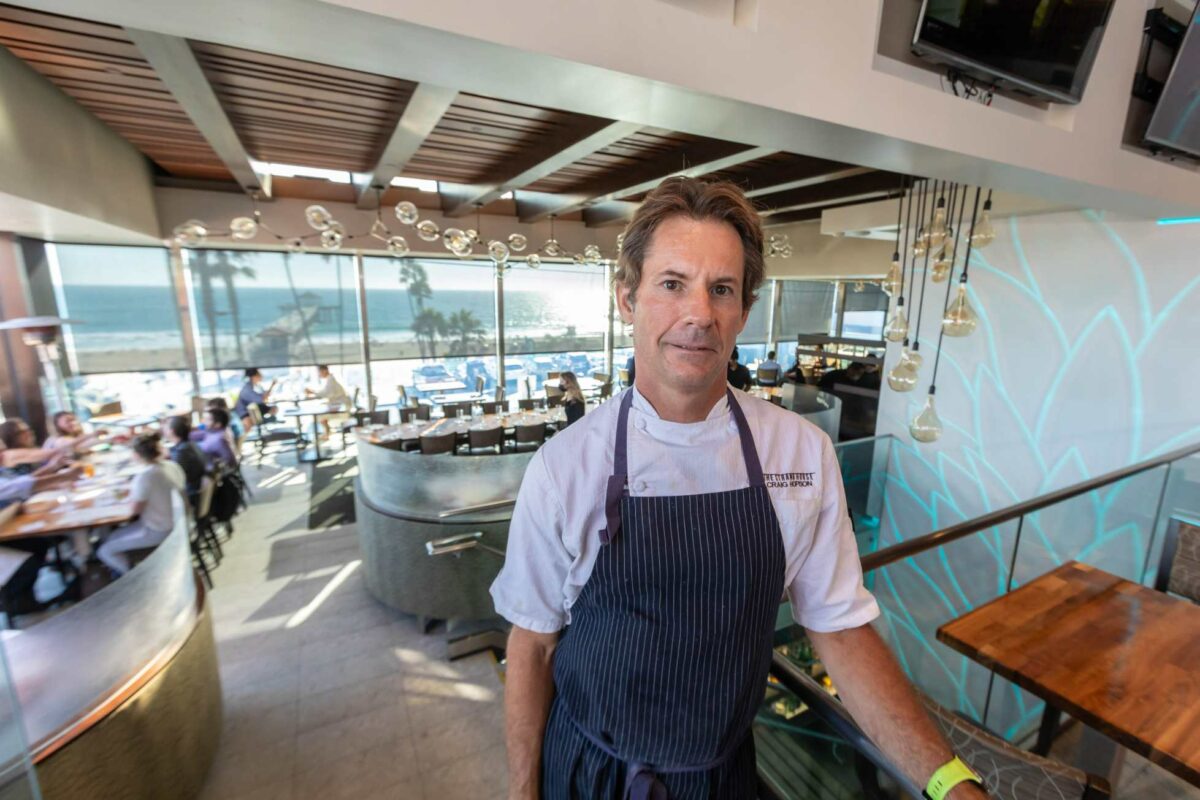 The menu at The Strand House includes specialties from at least five different chefs, and is better for it

I don’t often find myself comparing restaurant offerings to geology, but that’s just the metaphor that went through my mind when I had dinner last week at The Strand House. I have been there over the course of a decade, and through the tenure of at least five chefs, each of whom arrived with their own ideas about what would please diners. At many restaurants each new chef would wipe the slate clean, and cook just what they liked, but somehow that’s not how it worked here. Instead, you can see the high points of each chef’s tenure in the menu, offerings like the strata in a bed of fossils. It’s interesting to look at food trends of the past while musing over what the current holder of the position will bring to the establishment.

The chef at Strand House now is Craig Hopson, an Australian who brings a passion for modern French technique. Previous chefs brought passions for New American, Southern European, and Asian fusion ideas, all mixed with an experimental bent and tendency to make as much as possible in-house.  We saw some old favorites on the menu and considered ordering some, but we really wanted to see what Chef Hopson was up to and asked our server to recommend some of his creations. He suggested a summer corn soup with corn and crab fritters, beet and plum salad, and a tempura soft shell crab over forbidden rice with chai-spiced tomato sauce. Flavoring tomato sauce with Indian-spiced tea was an idea I had never seen before, and it’s a good one. The exotic, slightly smoky herbal flavor is great with the nutty black rice. The crabs that topped this were poised one atop the other like a crustacean game of leapfrog, a dramatic presentation for a seafood item that had been sensibly left almost unadorned. The battered and fried seafood was a clean, natural flavor to pair against the calculated and complex flavors on the plate, and the restraint paid off. 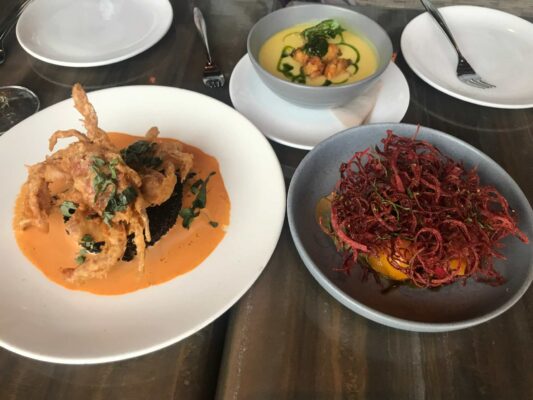 I almost had turned down the plum and beet salad because my wife and I had just had a peach and beet salad the previous day, but I’m glad we got this one. Who would have thought of shredding beets, deep-frying them so they’re a crispy disc, and then putting that atop the fresh fruit and roasted vegetable? The pistachio vinaigrette and mint leaves lent a slight Middle Eastern flavor, and it was a novel twist on a modern classic. The corn soup was conventional by comparison, a simple set of flavors accented by a swirl of basil pesto. It has the simplicity of Mediterranean French cooking, showing off good ingredients and knowing when to stop.

We continued with an item that has been on the menu for years in different preparations, Ora king salmon. This New Zealand farmed fish gets high marks for both sustainability and flavor, and when we visited four years ago it was prepared with an Asian-style sauce that included radishes and Japanese pickles. Chef Hopson took it in a different direction, with the grilled fish over grilled squash, tomato, and lemon cucumber with tempura zucchini blossoms, and a slightly salty, and minerally herb called agretti. This tastes a bit like seasoned spinach and is a very good companion to fish, and now that I’ve tried it, I’m going to look for it in the produce department. The vegetables had been tossed in a subtle miso vinaigrette after being grilled, which left the flavors distinctive and complemented the perfectly done fish. 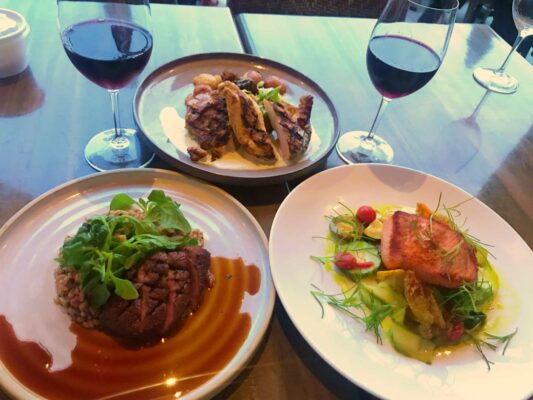 After this we had the Peruvian chicken and a roasted duck breast with farro (and yes, we over-ordered, but my wife got two days of office lunches out of the dinner). The Peruvian chicken wasn’t entirely different from the item that has become popular in the last few years, but the accompanying sauce blended Peruvian peppers with pureed celery and buttermilk. It was a great mix of coolness and pepper heat that complemented the chicken and side of crispy roasted potatoes quite well. The roasted duck breast was conventional by comparison, and perhaps the most true to French tradition even though this was achieved with unusual ingredients. The confit leg and thigh were atop a bed of farro that had bits of tart rhubarb that cut through the fatty flavors of the meat and the beef-based glaze.

The Strand House has an impressive by-the-glass list, and, as has always been the case here, the servers know their stock. We asked for suggestions and received excellent pairings, particularly a Cherry House Rhone with the duck.

We almost decided to share one dessert, but couldn’t decide between a sweet corn cake with blueberry and ricotta and a key lime tart, one of my favorite desserts. Both were very fine, but I’d give the edge to the corn cake, which was topped with sweet corn ice cream, cornflake crumble, and salted honey butterscotch. My wife rarely likes salted caramel or sweets but was won over by the combination of vegetable and honey sweetness with a slight salty bite.

On a whim the next day I looked online and discovered that the Strand House had space for Sunday brunch, so we headed over to see what chef Hopson might have added to that menu. It turned out that this hasn’t changed much, so my wife ordered a salmon benedict that she had liked on a previous visit while I had the breakfast burrito, and we split a cinnamon roll. The breakfast burrito here is barely recognizable as a burrito – it arrives beneath a pair of sunny side up eggs rather than with the eggs inside. It’s stuffed with hash browns and skirt steak, a cut that’s a bit tougher than many others, but very flavorful when properly prepared, and There are beans, salsa, and housemade chips on the side. I prefer the more traditional form of the burrito, but all the flavors were spot on. I highly recommend pairing this with the cocktail called Weekend Brunch, which has very strong citrus and herbal flavors, because it accents the Mexican spices. My wife’s peach Old Fashioned was unusually fruity by comparison, and was the only cocktail I’ve had here that wasn’t to my taste

I would have the cinnamon roll again but ask for the glaze on the side, because the sweet and salty bacon butterscotch maple flavors were a bit overpowering. The idea was good, but I would have liked to have the option to get only as much as I wanted.

Brunch at The Strand House is surprisingly reasonable for excellent food, and drinks with a beach view. A meal for two with a pot of French press and cocktails ran about $70. If you haven’t visited for lunch, brunch, or dinner, do it. They’re celebrating a decade in business and are as vital a part of the local dining scene as ever.