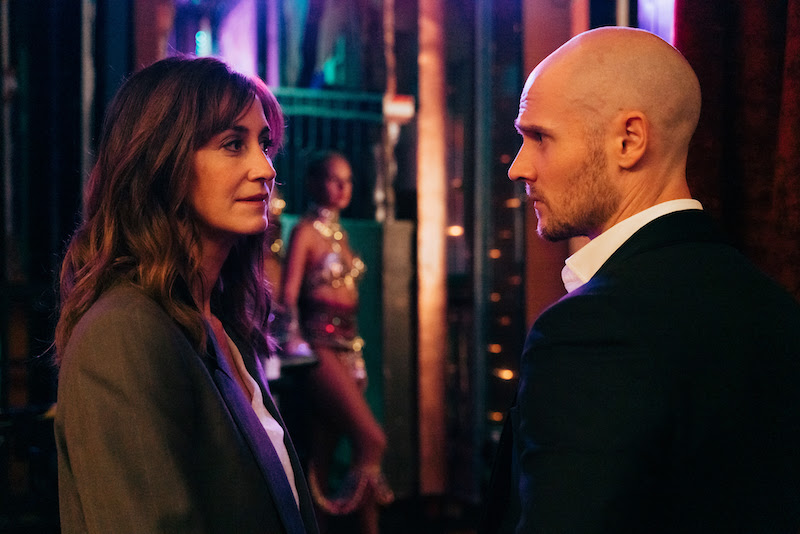 Eléonore Bernheim as Florence Chassagne and Nicolas Gob as Antoine Verlay in “The Art of Crime” Photo courtesy of MHz Choice.

The Fourth Season of “The Art of the Crime” begins soon on MHz Choice. Although Season Three, reviewed previously (“Art of the Crime” – Season 3) had become perfunctory and much more procedural with less effective character development, some of that is remedied in this new season. Once again using the format of two 2-part episodes to constitute what they call a four episode season, they would have been better off transmitting them as two movies instead for continuity and interest sake.

Nevertheless, the writers have wisely dropped the “art agnosia” theme from the character of Capitaine Antoine Verlay (Nicolas Gob), who, teamed with art historian Florence Chassagne (Eléanore Bernheim), leads investigations of the OCBC, the fictional police division that solves crimes related to art.

In Season Three, Verlay was teamed with a new partner, Juliette Mariton (Dounia Coesens) when Chassagne was temporarily relieved of duty for a political misstep. Chassagne, still suffering from unrequited love for Verlay, is dismayed to discover that Verlay and Juliette are partnered in more ways than one. Although there have been indications that Verlay shares an attraction to Chassagne, a critical memory loss has erased this from his mind.

In Season Four, back on the job, Chassagne must stand by helplessly as Verlay announces his engagement and impending marriage to Juliette who now works in a different division. This is a classic, and also very clichéd use of the “will they or won’t they” trope in terms of Chassagne’s and Verlay’s inevitable romantic reckoning. Spoiler alert, this season doesn’t solve that problem.

What this season does, however, is go back to more interesting cases that reveal intriguing incidents from the past. The first involves the death of Van Gogh and whether or not he committed suicide. Chassagne and Verlay take a road trip to the southern French town of Arles where he lived before suffering from his final breakdown. We are treated to a visit to the famous church and a recreation of the room in which he lived. Like many early episodes in “The Art of the Crime,” the viewer is treated to an informative history of the final months in the life of Van Gogh and the battle between historians on whether he was shot, accidentally or otherwise, by neighborhood boys, or committed suicide, as has been the theory for many years until recently. It is a plot that involves the murder of a telegenic historian, a mysterious “missing” letter, and revenge.

Episodes three and four, again a two-parter, bring the viewer into the world of the Moulin Rouge, both today and in Toulouse Lautrec’s heyday. The clue to a backstage murder lies in the famous painting, “At the Moulin Rouge,” a copy of which is found by the body. Chief suspect, the victim’s girlfriend.

Murder, intrigue, the personages within the painting, all are well defined. The set-up and the solution are more contrived than usual, but the backdrop is fascinating even if the convoluted plot isn’t. But again, better defined in this episode is the desperation felt by Chassagne in being incapable of articulating her unrequited love, something that everyone, of course with the exception of Verlay, sees clearly.