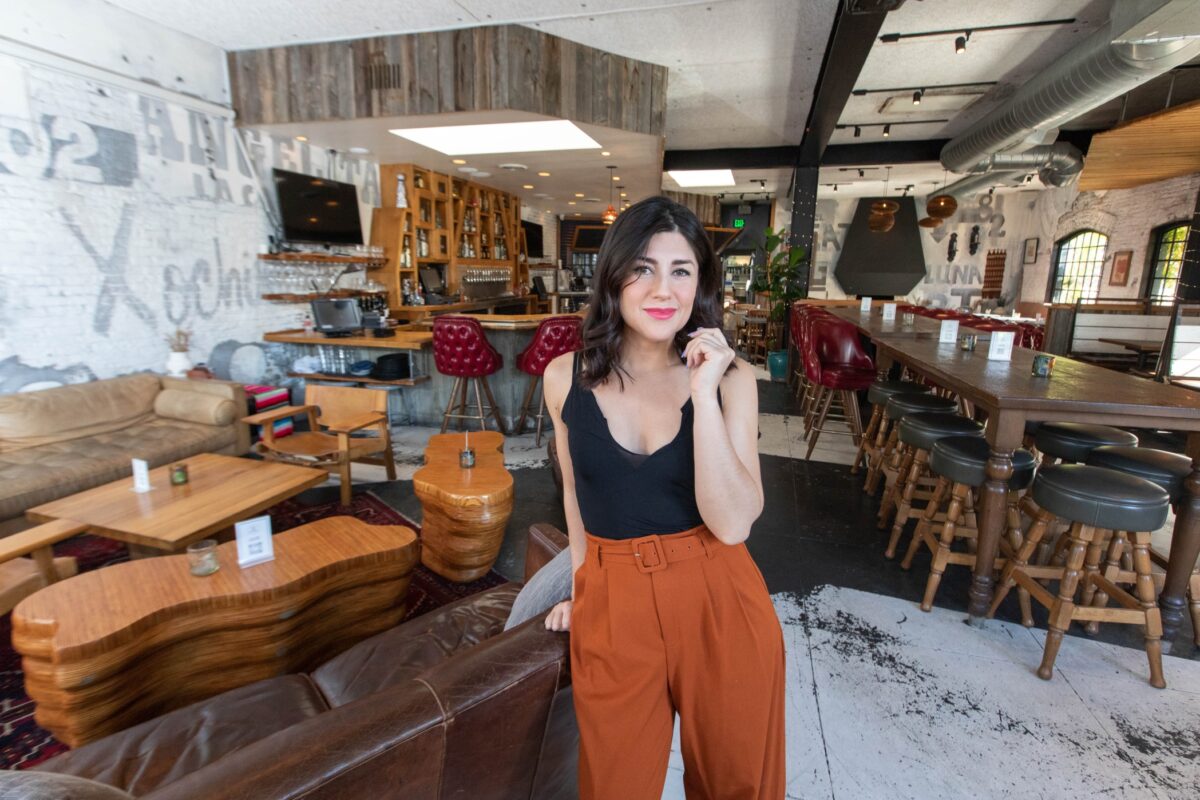 I like to look back at old menus and reviews from groundbreaking places to compare with what they’re doing now. Some are still serving the same food as when they opened, often because that menu was designed by a consultant whose creativity departed when they cashed the check and packed up their knives. Others underwent a slow but complete metamorphosis so that almost nothing of their original offerings remain, and sometimes there has been a style shift that really should have been signaled by changing the restaurant’s name.

Most places are somewhere in between, keeping the most popular items while adding new ones in response to dining trends, customer demand, and the whims of a creative chef. I have heard from some kitchen staff that the third type of restaurant is most enjoyable as a place to work, because they have some items they know by heart and execute effortlessly while others bring challenges and new skills.

Dia de Campo has followed that middle path at a meditative pace, with about half of the menu items pretty close to what they were serving when they opened in 2014. That’s actually a high rate of turnover given that this is a Mexican restaurant and some items are iconic – it would be startling if chicken, fish and steak tacos were absent, for instance. Dia has these, but also tacos with lamb braised in red wine, cauliflower with chipotle, and mushroom in mole sauce. The sauces are mostly traditional, but the way they’re used is creative.

The indoor space has a comfortable lounge by the bar, and conventional tables within, plus outdoor tables on the dining deck. When they opened the noise level inside was raucous, but on recent visits the mix of mariachi music, classic rock, and bouncy alt-pop was at a moderate level. As is the case at many places the menu is available either on paper or on your phone using a QR code, and neither is easy to read here due to the restaurant’s logo under the text. The descriptions are sometimes cryptic and occasionally incomplete, so ask your server if you have allergies or other dietary restrictions. 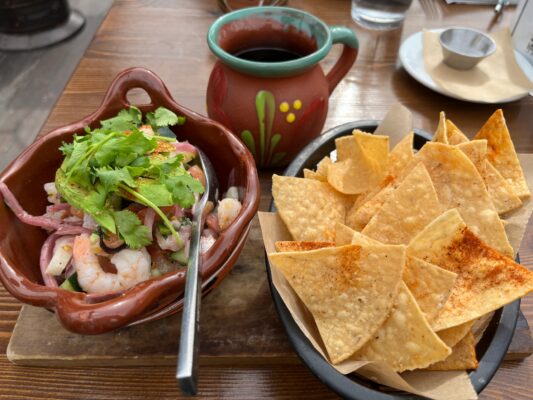 The portions on most items are fairly substantial, so if you go overboard on starters you won’t have room for dinner. In recent visits we tried their chips and salsa, a ceviche mixto, the Azteca salad, and one each of the lamb and carnitas tacos. Chips and salsa are free at most Mexican restaurants, but cost six dollars here and in my opinion aren’t worth it. The salsa is decent, with flavors of roasted chile, onion, cilantro, and tomato, but the chips arrived cold and unevenly coated with salty chile powder. Uncoated chips are available if you order them that way, but nobody tells you that this is necessary. We’re not fans of the powder, so ate the ones that were least coated and left the rest. The chips were better when dipped in warm red mole sauce, something not usually offered as an accompaniment but which our server Ike brought on request. It’s a very good mole, thick, rich, and chocolatey, and the sample made me want more.

Those spicy chips came with the ceviche too, because we forgot to order them unpowdered. The mixto is nicely balanced with flavors of seafood, chile, onion, serrano, jicama, and just enough lime juice. An aguachile is available for those who like their ceviche hotter and more citric, but I was dining with someone with a tender palate. 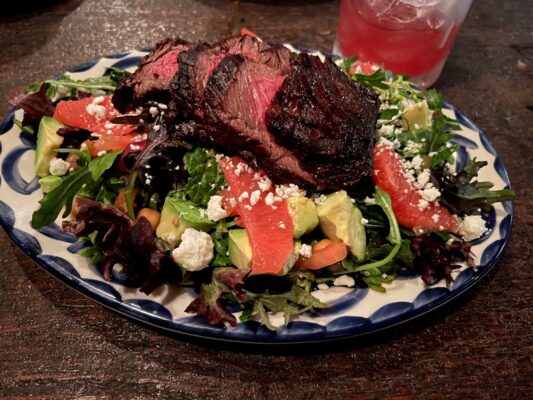 The Aztec salad isn’t anything any ancient Aztec would have recognized. it has European items like beef, chickpeas, and blood orange, but it’s a very good shared starter for four people. The mix of greens, tomato, and avocado was topped with a sprinkling of cotija cheese and slices of wood-grilled steak. We had asked for the meat medium-rare, and it was a perfect pink in the middle with a smoky exterior crust. This is a stellar starter or main course salad, and one that I hope they keep on the menu.

As for the tacos, the carnitas was a tortilla overloaded with the porky mix of soft and crispy bits along with pickled red onion. The red wine braised lamb taco had an intense and enjoyable flavor but the stock hadn’t been reduced much so that it was very runny. It’s quite enjoyable, but handle with care or you’ll have to get the spots out of your shirt.

For our evening visit we tried the seafood soup and a shrimp and chorizo enchilada, and at brunch a seafood omelet and the Dia Benedict. The seafood soup was very similar to a spicy cioppino, the broth was thick and rich with plenty of mussels, clams, shrimp, and fish. I was a bit less delighted with the enchilada because while the filling had plenty of flavor, there was hardly any cheese or sauce. It was tasty but not what I think of when I order an enchilada. (My dining companion and I disagree on this one, as he thought it was one of the best he’s ever had.) Both meals have a choice of tomato rice or cilantro rice, and pinto or black beans, so we ordered one of each. I slightly preferred the tomato rice to the cilantro but appreciated that both were very fresh and had not sat so long that they clumped together. I was surprised to prefer the pintos, which were served whole in broth rather than being refried. I usually favor black beans, but both were praiseworthy. 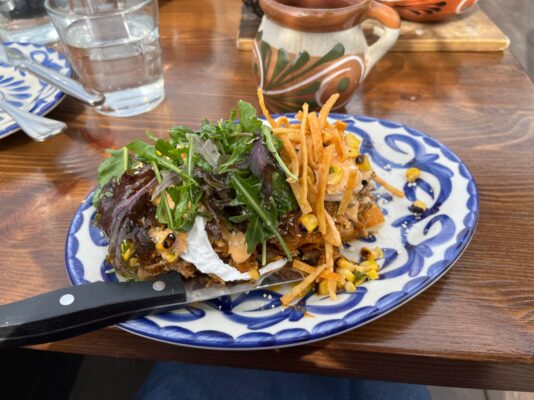 The seafood omelet at brunch was made with two eggs so was smaller than some around town, but had a buttery flavor rich seafood mix so was sufficiently filling. It was served with a large salad in which peppery arugula, sweet cucumber, jicama, and purple onion harmonize, and I used the fresh corn tortillas to make salad tacos.

As much as I liked the omelet, the Dia Benedict was even better, though intimidatingly large. A slab of focaccia was layered with carnitas, poached eggs, grilled onions, corn, salad, fresh hollandaise, corn and pasilla salsa, and tortilla chips. If you like eggs benedict, this is a must-try take on tradition with variety in every bite. If you’re there with someone else and they’re amenable, get one of the lighter breakfast items and this and split them, and you’ll be glad you did.

With that breakfast we had mugs of coffee, not a fancy variation because they keep it simple. I’m surprised that they don’t offer cinnamon or canela because that’s the way coffee is often served in Mexico, and it would have been nice. At dinner we sampled cocktails from a selection that goes well beyond traditional margaritas. Their Mexican take on a Mai Tai and Tiempo Con Amigos were very good, but the elderflower cocktail was so heavily floral and citric that the taste of the spirit was lost. We also tried both their red and white sangria, both of which were fruity but not over-sweet. I slightly preferred the white sangria with brandy to the red with herbal falernum, but would have either again.

Brunch ran about $35 each with coffee, dinner about $40 food only plus drinks. Dia de Campo’s strategy from the beginning has been to extend Mexican flavors with style, and they’re doing it at a reasonable price given the Hermosa Avenue location. If you haven’t been there, or haven’t been back, it’s worth a visit.