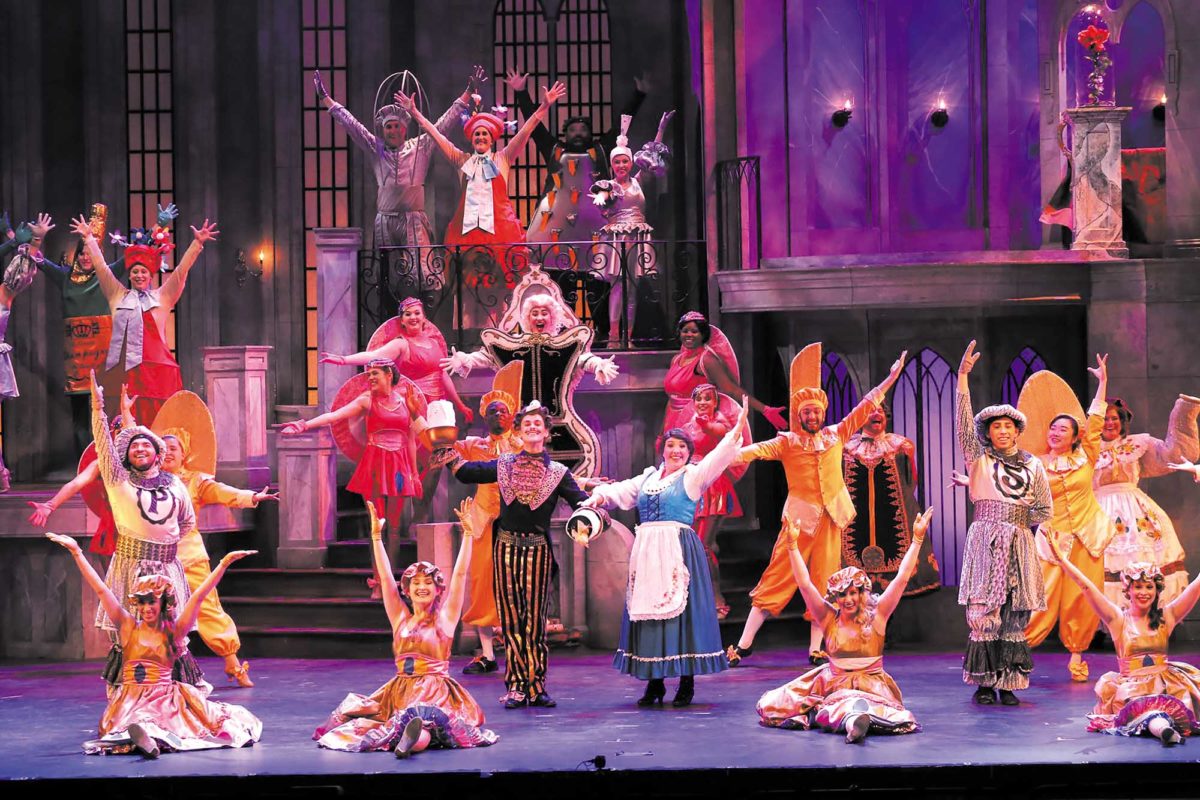 With a party this grand, she’s bound to stay. Center: Jacob Asaro as Lumiere and Brianna Liddi as Belle. Photo by Miguel Elliot

Torrance Theatre Company goes all out with “Beauty and the Beast”

In the quarter century since its debut, Disney’s live-action rendition of “Beauty and the Beast” has become a classic and, better yet, a staple of musical theater. We’ve had chances to see it in southern California and even locally: 3-D Theatricals staged a fine production in Redondo Beach a couple of years back, and even Mira Costa High School has given it a go. Now, in tandem with their 20th anniversary, the Torrance Theatre Company is presenting it over two weekends in the James Armstrong Theatre. Four more shows remain, Thursday through Sunday. It’s a worthy endeavor, so keep reading.

The Disney musical (music by Alan Menken, lyrics by Howard Ashman and Tim Rice, book by Linda Wolverton) originally opened in Los Angeles and thrust Susan Egan and Terrence Mann into the spotlight for their performance in the title roles: A musical just for kids this wasn’t. 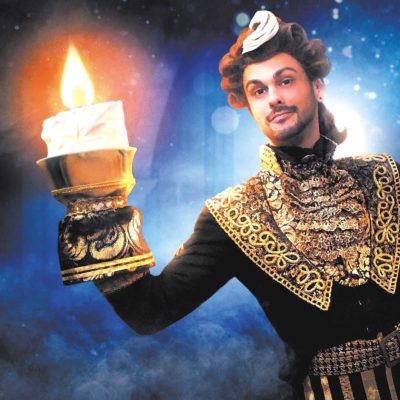 You know the fairy tale. A pretty maiden eventually finds compassion in her heart for the ugly and terrifying beast who’s keeping her under house-arrest in his castle. He himself is under a spell for dismissing a sorceress disguised as a beggarwoman, and the only thing that will banish this curse is if he can find a woman who will agree to marry him. Because of his outward appearance and gruff manners, this is a hard sell. Furthermore, time is of the essence: if he can’t win a maiden’s heart by the time the last petal falls on a certain red rose in bloom, well, it’s all over. The castle goes on the market, so to speak.

The musical, and the animated film that preceded it, soften the rough edges of the story to make it family-friendly. Not only has the Prince been transformed into a monster, his servants, both male and female, have also been altered, but in their case one’s a candelabra (Lumiere), another’s a teapot (Mrs. Potts), still another is a chest-of-drawers (Madame de la Grande Bouche), and so on.

But first the lead characters. Most Disney heroines have waspish figures, but Belle’s Brianna Liddi is plump, and thus visually not what one might expect going in. On the other hand, it’s clear that she was selected for this role for her voice and her exuberance, two ingredients the show cannot do without. On that note, Jayson Ziegenhagen really isn’t physically convincing as the oversized buffoon, and Belle suitor, Gaston. Not to take it upon myself to rewrite the job description, but Gaston really is supposed to resemble a lumberjack in appearance, and an extremely self-centered one at that. (To quote the lyrics: “When I was a lad I ate four dozen eggs/ Every morning to help me get large/ And now that I’m grown/ I eat five dozen eggs/ So I’m roughly the size of a barge”) This isn’t to slight Ziegenhagen’s acting, but we come into these musicals with all of our senses, not just our ears. 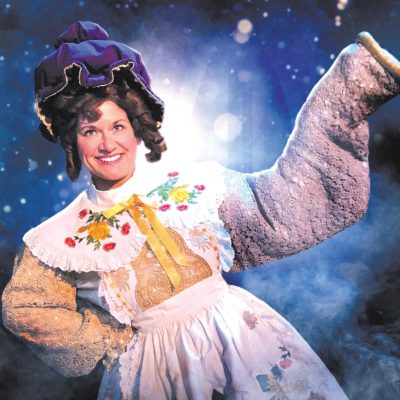 If you’re starting to think, “Man, this reviewer’s going to start cutting down every cast member and then some,” let me just pause to say that generally speaking the acting is terrific and it’s clear that the company rehearsed and rehearsed until they got it right.

However, as I noted after watching 3-D Theatricals’ take on this musical, the supporting actors occasionally outshine the stars. That’s true here as well. I will admit that for me the opening village scenes were not immediately compelling. Painted backdrops, and Belle’s home (hardly more than a backdrop itself), are enough to alert us to the fact that this isn’t going to be a lavish production. But after the canvas backdrop is whisked upwards into the fly loft we’re left with the show’s set piece, the interior of the castle or palace, where we encounter its forlorn but hopeful inhabitants.

The banter between Jacob Asaro as Lumiere and Jonathan Strand as Cogsworth is instantly engaging. Elizabeth Bouton is a delightful Mrs. Potts, and Mackenzie Hamilton as Madame de la Grande Bouche and Angelica Roqué as Babette are both colorful and animated. And let’s not neglect little Chip, the teacup child of Mrs. Potts, played with facial dexterity by Olivia Liddi, the real-life younger sister of Brianna Liddi.

It’s these characters that can have us warming up to the show, which is by turns pleasant, wistful, tragic, and urgent. I’m sure that by now everyone’s noticed how Disney has gone about empowering its female stars, turning them into spunky, take-charge heroines who can even come across as bossy rather than traditionally demure and tentative, as if at any moment they could shed their peasant gowns to reveal themselves as CEOs of major financial institutions. Belle clearly isn’t afraid to talk back to the Beast when he orders her to come down for dinner. 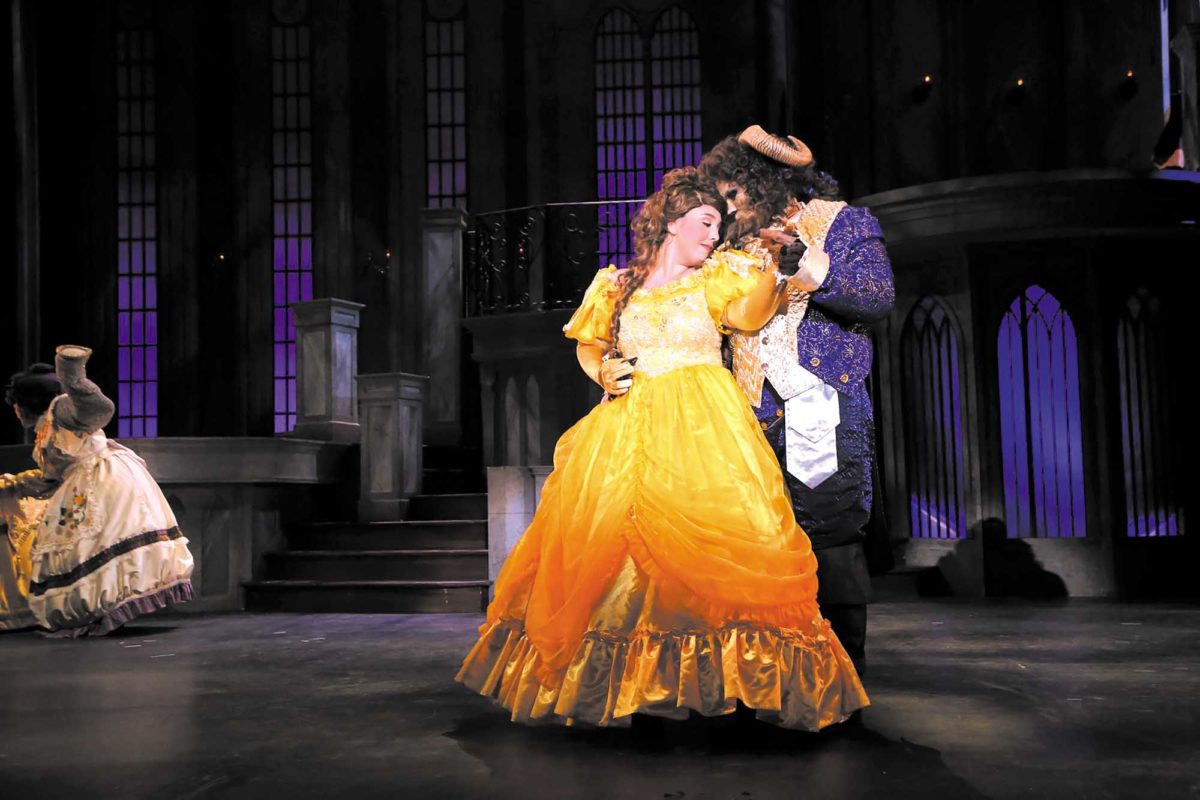 Brianna Liddi as Belle and Christopher Tiernan as the Beast. Photo by Miguel Elliot

Which brings us to the other lead role, with Christopher Tiernan, who carries himself well as the imposing and temperamental Beast. He is supposed to be fearsome, and not terribly good-looking (that’s the point), but his leonine qualities evaporate quickly after being scolded by the headstrong young girl. In short, he wimps out at the end, which maybe draws a few laughs but also destroys his terrifying image. In real life, of course, he would eat her.

Many things are streamlined, added, or deleted in the musical. For example, Belle doesn’t have three brothers, and here’s she’s not negligent about returning to the Beast (in the fairy tale she finds him dying). You can forget those little details.

Belle’s father, Maurice (Ruben Morales), is no longer a harried merchant concerned for the welfare of his children, but an absentminded inventor who seems like a cross between Geppetto and Einstein. 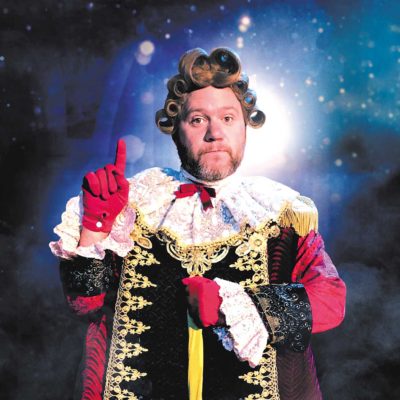 As for Gaston, he’s the prancing, self-preening and egocentric town bachelor who decides that Belle will marry him whether she likes the idea or not. She doesn’t, of course, because she’s a down-to-earth, bookish young woman who longs for more from life. Besides, Gaston is something of a playboy who doesn’t intend to give up his girlfriends whether he’s wedded or not. In the “Belle” reprise, our maiden sings: “I want adventure in the great wide somewhere!… And for once it must be grand/ to have someone understand.” That someone is most definitely not the he-man but pea-brained Gaston.

That “adventure in the great wide somewhere” isn’t a cruise to the Bahamas, but is seemingly crunched into her love of reading. When the Beast shows her his library, Belle oohs and aahs and all but swoons, although the backdrop has the bookcases on the sides and so the immediate effect upon the audience is slightly delayed. We’re looking at a tall window; then we see the books. They should be front and foremost. Also, why does the Beast (former Prince) have so many books if he can’t read? That’s like being blind and having Renoirs on your walls.

At any rate, what keeps the show going is its pacing, and we can thank director Jim Hormel for that. The choreography by Niko Montelibano seems to match or at least parallel the original choreography by Matt West. The dance scenes, involving all or most of the ensemble, are fairly vibrant and colorful, and nicely rehearsed (the Tavern number, for example).

Of course, it would be a moot and mute point if there was no music, and the 12-piece orchestra, conducted by Bradley Hampton, really does step up. I’ve seen the show with more musicians, but here the sound carries nicely and if anything’s missing you won’t notice it. The lighting is also effective throughout, with the Beast being most effective when he’s not directly lit. The transformation scene at the end carries its own kind of magic and leads straight into the touching and uplifting finale with the leading members of the cast: “Tale as old as time/ Song as old as rhyme/ Beauty and the Beast.”

The show is well done and the entire company should be proud of having pulled it all together. It certainly caps 20 years of fine work in the South Bay community… and should portend at least 20 more.

Beauty and the Beast plays Thursday at 7 p.m., Friday and Saturday at 8 p.m., plus Saturday at 2 p.m., in the James Armstrong Theatre, 3330 Civic Center Drive, Torrance. Tickets, $40 and $25, available at the box office or by calling (310) 781-7171. More information if you visit TorranceTheatreCompany.com. ER