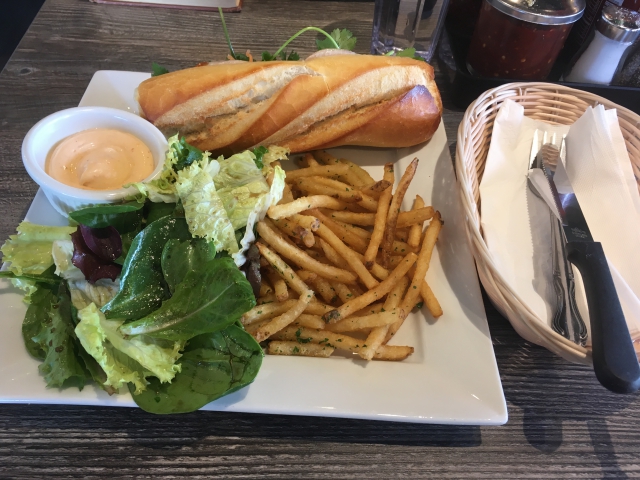 If you created a cuisine from scratch to fit modern Californian ideas, it might look a lot like Vietnamese food. There are plenty of vegetables, fresh, cooked, or lightly pickled, sometimes all used in the same item. Meat and seafood are used sparingly but effectively, and fresh herbs enliven almost every dish. And while the cuisine as a whole isn’t spicy, there are sauces on the side that have a fresh, garlicky heat. It’s all of our ideas about health and flavor in one package, and as a bonus, it’s usually inexpensive.

In the last decade Vietnamese items have edged into the mainstream, but we don’t yet have many choices for Viet restaurant dining in the South Bay. A newcomer in North Redondo is making waves with a slightly modernized variant of the cuisine, and it has become a popular stop for local Asian food enthusiasts.

Pho Hue Oi is actually the farthest you can get from the pier and still be in Redondo. It’s at the corner of Inglewood and Marine avenues. It’s not easy to see from the street because the entrance faces the supermarket. That hasn’t kept it from being busy at lunch midweek, when people from nearby offices crowd the place. But it’s never a long wait because service is fast, so even a daunting line moves along.

The menu offers the usual trinity of Vietnamese food: a variety of soups, rice or noodle plates, and banh mi sandwiches, plus appetizers and beverages. A few items are out of the ordinary, such as the garlic French fries and eggroll skin-wrapped shrimp, Vietnamese-style chicken wings, and a spicy pork and beef garlic sausage. The fries are a side option with the sandwiches and I’d get them as a side but not as a starter, because there are more interesting choices. The shrimp wrapped with green onion in eggroll skins are a nice novelty, but I actually preferred the standard spring rolls, which come with lettuce and mint leaves for making a kind of salad burrito.

The appetizers that really stood out were the wings and the grilled sausage. The wings had been marinated with fish sauce that adds tangy umami, and dusted with spices and a dash of red pepper along with a healthy amount of garlic. They aren’t hot wings by any standard definition, but they beat standard gastropub wings by a mile. As for the sausage, it would seem to be a hard sell because it includes snouts, ears, and other chewy bits of a pig as well as sesame, ginger, galangal, and enough red pepper to provide plenty of kick. If you have an open mind and are ready to appreciate a spicy, richly flavored sausage with a slightly rubbery texture, this could be your new favorite snack. 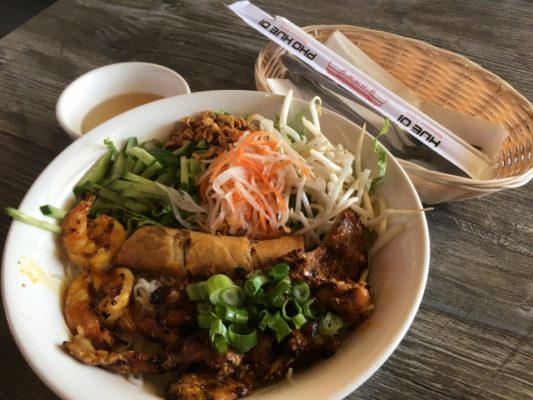 Combination bowls like this one with pork, eggrolls, grilled shrimp, and salad over noodles offer a balance of textures and flavors.

Pho Hue Oi is an offshoot of a popular restaurant in Orange County’s Little Saigon that also specializes in the food of central Vietnam. This is a bit different in spicing and style from the Saigon-style places that are the majority here, and there are a few distinctive specialties. One is the soup called Bun Bo Hue, which uses a stock of both beef and pork bones along with fish sauce, shrimp paste, and a melange of spices and herbs. This is different from the popular pho style of soup, which is almost always made with a pure beef broth and is generally a bit less spicy. Pho Hue Oi’s version of Bun Bo Hue is on the mild side, perhaps deliberately since it might otherwise be a hard sell for a non-Vietnamese crowd. As with almost everything you order here it’s served with a plate of herbs that you can add if you like a more intense, fragrant experience, and there are a few sauces you can add to intensify the heat. One is Sriracha, a sauce formulated by a Vietnamese refugee in the USA despite being named after a village in Thailand. As the world knows Sriracha is good in almost anything, but before you reach for it I recommend exploring the house-made sauces that are also on your table. There are many different kinds of hot, and you may find one you like even better.

Banh Mi sandwiches are associated with Saigon rather than Hue, and they don’t have a long history. French colonizers brought baking traditions to the country in the 1880s, but baguettes were unaffordable for most Vietnamese until the 1950s. The banh mi sandwich, which pairs a variety of meats with pickled carrots and daikon, a dab of mayo, and fresh cilantro and cucumber, was probably invented in 1955 and spread to the rest of the world 20 years later with refugees fleeing the fall of South Vietnam. It took the turn of a new century for them to move outside the Vietnamese community, but they are growing in popularity worldwide.

The aesthetic is different from a classic American sandwich, which is piled sky-high with meat. The Vietnamese prefer a balance of flavors and use fillings judiciously, and regard the freshness and crispness of the baguette to be of great importance. In the USA either pickled or fresh jalapenos are often added, usually after being deseeded to reduce the heat. The banh mi served at Pho Hue Oi is very light on the jalapenos unless you specify when ordering that you like them. I recommend the grilled pork or cold cut versions, but you really can’t go wrong with any of these. They’re offered with crispy garlic fries, which are good but will leave you with serious garlic breath. Regular fries are not on the menu but can be requested, and if you have a business meeting or date with someone who didn’t join you for lunch it’s a good path to take. 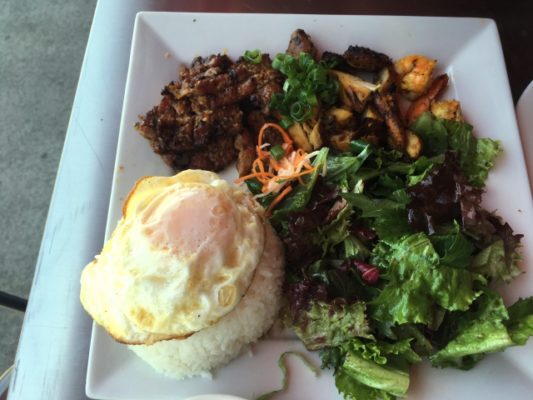 Rice plated like this one comes with an over-easy egg to balance the spiciness of lemongrass pork and and grilled chicken.

If you have that date or meeting you can forget about getting the garlic noodles too, but otherwise they’re highly recommended. It’s just noodles in garlic sauce topped by either cubes of filet mignon or grilled prawns, a departure from the usual pattern of balancing protein and vegetables, but it’s really good. I had the filet, which had been wok-seared with lemongrass, star anise, black pepper, and other spices, and it was superb.

If you can’t make up your mind about what to have, or just want to sample a variety of flavors, I recommend the Bun Tom, a plate of vermicelli noodles and salad topped with grilled pork or beef, shrimp, and egg rolls. There is also a version of this over rice that comes with a fried egg, and either way you get to experience a great variety of flavors and textures in one entree.

Whichever you choose at Pho Hue Oi, you won’t pay very much. The most expensive items on the menu are shy of $15, and most are under $10. And yes, it’s more than you’d pay in Little Saigon, but they’re not paying Redondo Beach rents out there. We already had a few good options for Vietnamese food in our area, and Pho Hue Oi brings a slightly different aesthetic to the mix. I hope they add even more Hue-style items to the menu, but for now they’re a good place for newcomers to experiment and veterans to find their regional favorites.