Here Today, Gone Tomorrow – “Fame,” in El Segundo, explores the renowned and the forgotten in a new exhibition 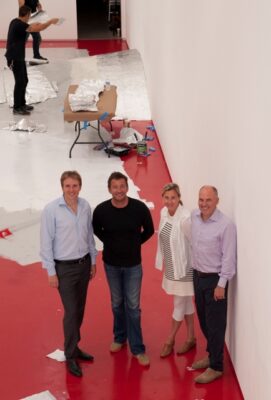 As Goethe says in Wilhelm Meister’s Journeyman Years, “the names of outstanding men survive some fifty years in the memory of the people – after that the names vanish or become legendary.” Time and memory are dancing partners, but they’re not always in step.

“Museums are often about remembering,” says Justinian Jampol, “and remembering an artist and doing a show on their life, that’s a remembering process. This is a show that’s also about forgetting, who’s been forgotten along the way.”

Dr. Jampol, who is the founder and executive director of the Wende Museum in Culver City, is referring to “Fame,” the new exhibition opening Sunday at the El Segundo Museum of Art. The Wende Museum is loaning close to 20 pieces from their collection (about 44 total are on view).

Split down the middle

Not as well known as other cultural institutions in or around Los Angeles, the Wende – which means “change” or “turn” in German – is an archive of relics and artifacts from the Cold War. Jampol points out that it’s nearly 25 years since the Berlin Wall came down. Looked at another way, from 1945 through 1989 the Soviet Union and the satellites in its Communist empire gave birth to and nourished an entire ideology and culture that began melting away in the late 1980s. 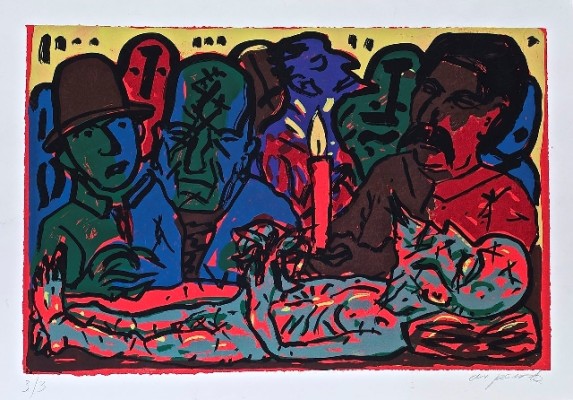 Lenin on his deathbed, art by A.R. Penck

After World War II, people on both sides of the Iron Curtain grew up with different reference points, different consumer goods, and different public figures to revile or admire.

The Wende Museum’s mission is not just to preserve physical items from that roughly 45-year period of history, but – in Jampol’s words – to “give them new meaning, give them a context, build new relationships. And also, where does the past go and what does it look like?”

Remember what Goethe said about the memory of the people.

“Somebody who has fame,” Jampol adds, “who’s known, who’s recognized; and all of a sudden there was a switch, the change to obscurity. That person’s fame is going to change in some way.”

This is especially true when someone has fallen out of favor or been deposed. Names are scratched from plaques and statues are pulled down.

“There are so many entry points to the show. You don’t have to know about the Cold War, you don’t necessarily have to know who these people are.”

“Fame,” the subject of the show and the title itself, is largely about memory. Bernhard Zuenkeler, the curator, indicates that the starting point of this exhibition began with realizing that his sister, Eva (he and Eva both grew up in Germany), had vastly different cultural or educational reference points from his brother-in-law, Brian Sweeney. In Germany, he says, it may have been Little Red Riding Hood absorbed through reading the Brothers Grimm as opposed to seeing it through the eyes of Walt Disney. 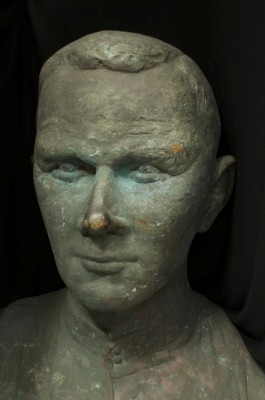 And so, in other ways, it’s a compare and contrast exhibition. The visitor to the museum will see items or works that may resonant with some of us, and yet not at all with other people.

“Depending on where you were born and when you were born,” says Jampol, “that’s the fleeting value of fame. And we’re in L.A. This is a town that’s obsessed with this.”

To some extent, then, is “Fame” predominantly about image, and the aggressive marketing of that image?

The Getty Museum wandered down this avenue some years ago with “NadarWarhol: ParisNewYork: Photography and Fame,” which advanced parallels between the Parisian Nadar in the 19th century and the New Yorker Warhol in the 20th “as adroit manipulators of the media, simultaneously promoting their own reputations and those of their subjects.” As Richard Brilliant wrote in the introduction to the catalogue that accompanied that show (in the summer and fall of 1999), “To be considered ‘famous’ and praiseworthy in modern mass societies seems to require a high degree of image-propagation, as if renown had less to do with a person’s achievements than with a mechanism for distributing images, abundantly present in the public eye. Merit is even less essential to the creation of the ‘celebrity,’ an intensely public condition dependent on the media’s ability to make one person stand out from the crowd in a self-affirming claim for attention.” 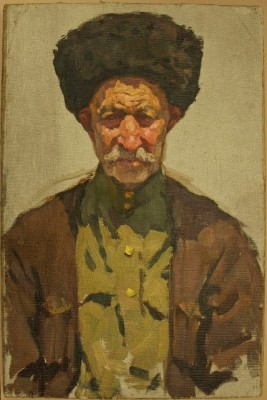 Painting of a Cossack by Irina Georgievna Broido

Fame used to be equated far more often with an unblemished reputation, an acknowledgment or reward for having achieved something of merit. Now, apparently, infamous is acceptable, and I have only to mention that wellspring of former child-actors whose naughty antics are thrust upon us, like it or not. Are they simply celebrities (known for being known)? Will they one day be icons as well? Where’s the fine line? Who decides, and when?

Is “fame” better than respectable obscurity? Would you rather have your 15 minutes with Warhol or go 15 rounds with Dempsey? And the public, of course, which is willing to eat you up, is also willing to spit you out.

As Paul Simon phrased it, “every generation throws a hero up the pop charts,” and one of the iconic figures of early rock ‘n’ roll was Elvis Presley. But the age group that embraced Elvis when he was first emerging is much different from that same age group today. Is his iconic stature enhanced or is it threatened by the large number of Elvis impersonators?

It’s an apt question, because on Thursday, Nov. 14, the El Segundo Museum of Art will co-produce “Elvis What?” with photographer Peter Badge. This will be a contest between Elvis impersonators – Ildy Lee are you listening? – to take place at the Old Town Music Hall, a block west of the museum. The winner may get a chance to show off his/her stuff in Berlin. 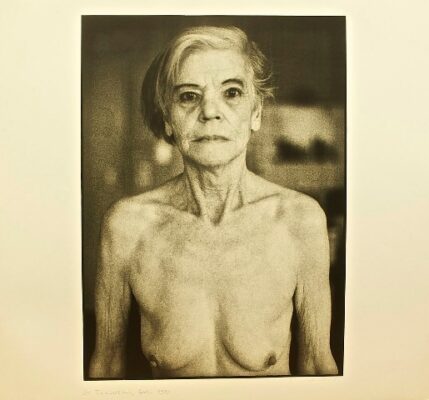 From a series by Gundula Schulze Eldowy

“What I like about it,” Zuenkeler says, “is the whole idea of impersonators and trying to catch something from (their) fame.”

Perhaps it’s what the members of so many “tribute” bands are consciously or subconsciously trying for, to bathe in some of that talent or glory of the original act.

“What does it mean to be authentic,” Jampol says, “which is always a question in art, and trying to [resemble] the original. But there are levels of authenticity within that. Sometimes the reproduction itself is the more authentic thing than the original.” 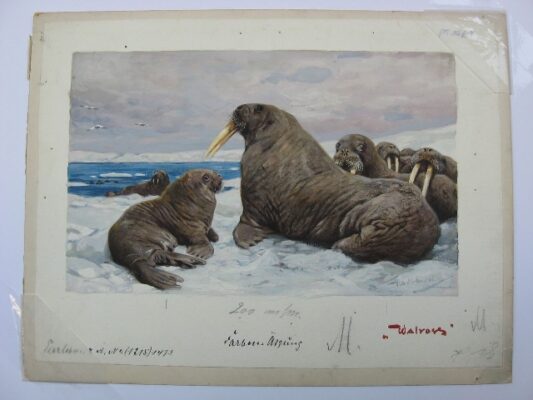 Zuenkeler says that Los Angeles is perhaps the best place in which to play with the notions of fame. “But what we wanted to do is not talk about fame in the usual way, but more in the way of [it being] a constant change process.”

The day after the Elvis impersonation contest, Peter Badge will escort the winner around the city, taking pictures of him so that, as Zuenkeler puts it, it’ll look like Elvis was in El Segundo. 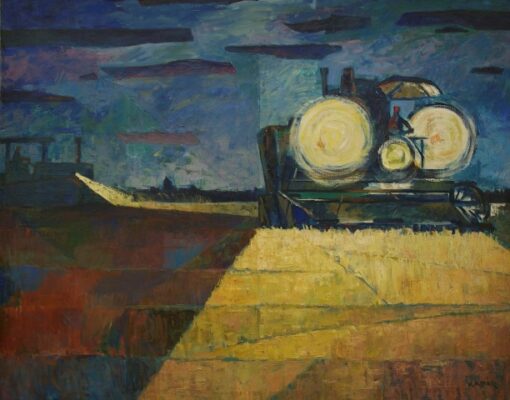 For Brian Sweeney, the show is an exploration of fame “and what it really means. And what are your true memories and what have you forgotten?”

Furthermore, is memory – our memory, the collective memory – even reliable? “The past is not fixed and established,” Anita Albus says in The Art of Arts; “every age needs to transform it and reimagine it afresh.”

Perhaps “Fame,” the exhibition, will make us realize that the old adage is true, that fame is fickle. The floor of the gallery has been transformed into something resembling a Tinseltown-silver skateboard park with a couple of “hills” that can be walked up or down. In life, perspective changes, depending on where we are, and when we got there.

One thing we can count on is having a unique experience.

“We would like to raise the bar every time,” Zuenkeler says. “In the end, we hope that people will say, well, this is like a magic box.”

Which means that we’ll never know exactly what to expect, only that it’ll be different, special, thought-provoking.