Establishment gets down to business in Hermosa Beach [RESTAURANT REVIEW] 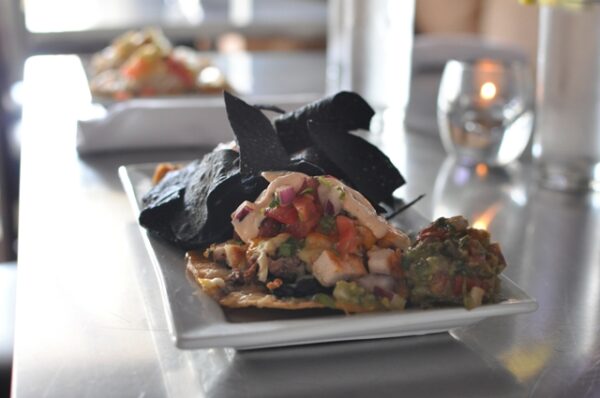 There are restaurants in New York City, Hollywood, and other bastions of hipness that make a point of their diffident attitude toward customers. This includes having no signage, phone, or other identifying marks – the idea is to convey that that they are so secure about being found by the cognoscenti that they need not make it easy, lest the vulgar and unwashed masses clog up the place.

For some time I was convinced that Hermosa Beach’s Establishment was following a version of this strategy, since they had no functional website and their phone was out of order. They weren’t trying to hide the place, though – the silvery facade and colored lighting stood out even in a glittery section of Hermosa Avenue. After waiting for the place to show some sign of permanence – perhaps putting something other than “coming soon” of their website, for instance – I finally decided to just drop in and see what was going on, which turns out to be a lot.

[Show as slideshow]
Establishment looks like a party place at which food would be an afterthought, with most of the tables at a height that suggests they’re for drinks rather than meals, but there is some serious cooking going on here. With very few exceptions everything appears to be made in-house, and some of the presentations and ideas show real creativity.

Exhibit A on this score is the plate of “nachos,” and I put that in quotes not only because these are nothing like any I’ve had, but because they only vaguely resemble the description on the menu. Instead of the usual layers of chips melted with cheese and beans, there are two whole fried corn tortillas topped with cheese, chicken, beef, and chipotle sauce, flanked by a mound of olive tapenade and dollops of guacamole and beans, with a stack of corn chips in the middle. The complexity verges on the baroque, but it’s a brilliantly conceived dish with many flavors to sample alone or in combination – despite my usual tendency to order entirely different meals when I visit a place twice for a review, we had to order this both times. It was still just as satisfying and interesting on the second visit, and since our second visit was during happy hour when it was five bucks instead of fourteen, it tasted even better.

We tried a few more items from that starters menu on both occasions, partly because we are thrifty by nature, partly because it was what everyone around us was doing. A quesadilla stuffed with grilled chicken, green apple, goat cheese, and ancho chili cranberry compote had a fine combination of spicy, sweet, and tart flavors, with just enough goat cheese unctuousness for balance. An order of fries arrived at the table hot and crisp, which is about all you can ask for, and with three dipping sauces which were better than expected – I homed in on the garlic mayonnaise as opposed to the ketchup and the never explained mild third sauce. We also tried an order of chicken wings three ways – two grilled with different barbecue sauces, plus a pair of traditional buffalo wings. Two of the grilled wings had a sweet and spicy barbecue sauce, two a vaguely Thai chili sauce that was in a very similar sweet and spicy groove – I’d like to see them use some grilling sauce with a different flavor, such as a Carolina mustard barbecue or rum-ginger sauce, just to add more range to the flavors.

Snack items like these demand a beverage, and beside sampling a few wines (Parducci Pinot Nor and a much better Wild Horse Pinot), we tried chocolate mint and pomegranate martinis. My wife ordered both of those, actually – I would have expected both to be too sweet for my palate. They both nodded in that direction but were shy of sugary – the crushed mint candy around the rim gave just the right peppery flavor to the chocolate. My drinks palate still leans toward concoctions where you taste the spirits, but these were as good as sweet drinks get in my book.

For main courses we took our server’s advice and ordered two more items that are on the shared plates menu – a half-rack of barbecue ribs and an order of grilled fish tacos. The ribs had been precooked and grill finished so they were fall off the bone tender, and the sweet and spicy barbecue sauce made them a tasty and rather messy treat. The spiciness was cumulative – what seemed sweet and mild had built up layers of spiciness by the time we were through. I prefer ribs that have the smoky flavor and coarser texture you get from slow-smoking, but these were quite decent. They were served with excellent house made potato chips that arrived hot, a tribute to the coordination of servers and kitchen given that the place was fairly full.

The fish in the tacos had been grilled rather than fried, and though they were nicely cooked the balance seemed slightly off. Perhaps it’s that the cole slaw wasn’t tart enough, the chipotle cream too mild, but no flavor or combination of flavors was quite assertive enough for my tastes. (My wife liked them just as they were and would probably regard my idea of perfect fish tacos as too spicy, but there are some things in which the parties in any relationship just agree to disagree.)

We were looking forward to trying the apple crisp for dessert, but on the only visit where we had enough room after the entrees, they had run out. We had churros with ice cream instead – premade ones, alas, but still tasty – and called it a night.

We fully intend to come back to Establishment and try some more items, possibly one of the steaks or the cedar planked salmon, because the skill they have shown with the other items here was noteworthy. This establishment is open for business and serious about their food, and they set a standard for lounge dining in Hermosa.

Establishment is at 1332 Hermosa Avenue in Hermosa Beach. Open daily for dinner only, full bar, street parking. Starters $8-15, mains $10-25. No working phone or website at this time.