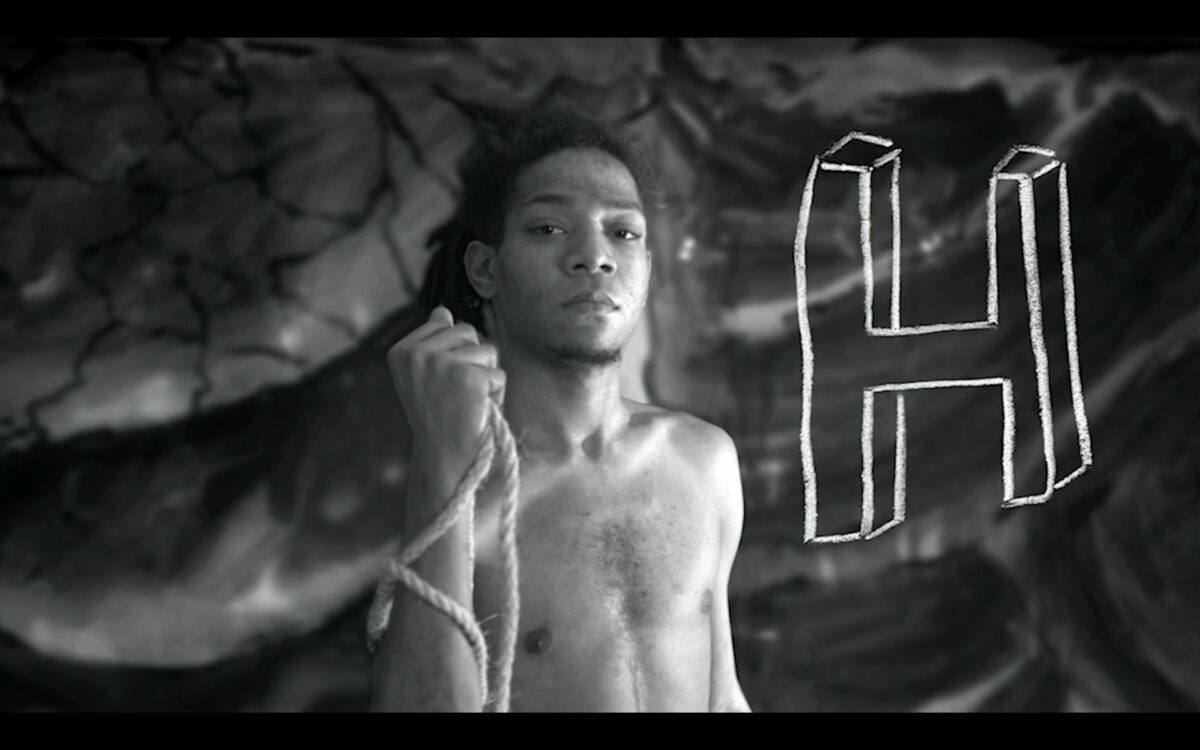 “Basquiat, Africa at Heart,” a documentary created by Cyril Bérard, dissects Jean-Michel Basquiat’s influential trip to Africa. Basquiat catapulted to fame when the contemporary art establishment embraced his street graffiti work, finding it raw, vibrant, and revolutionary. Part of a street movement that encompassed rap and punk, his art became an embodiment of hip hop. He appropriated poetry, found articles, painting, folkloric masks, and drawing into his graffiti murals and paintings. His meteoric rise was cut short at the age of 27 when he died of a heroin overdose.

Contrary to popular belief, or at least those who don’t know his origin, Basquiat was not a poor street kid. He was raised in a middle class Brooklyn home and attended arts-oriented schools. Very bright, he was fluent in French, Spanish, and English. His mother encouraged his artistic tendencies and, presciently, gifted him a copy of Gray’s Anatomy that ended up having an outside influence on his future art. When his parents divorced, he and his siblings lived with their father. His mother’s mental illness and her confinement to psychiatric hospitals when he was still quite young was very unsettling. 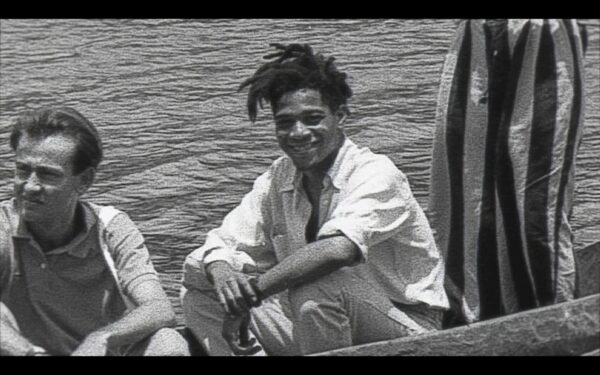 Jean-Michel Basquiat in the Ivory Coast in “Basquiat, Africa at Heart.” Photo courtesy of Georges Courreges.

Rebellious by nature, he tested the limits of his teachers, friends, and family, eventually dropping out of school, an action that prompted his father to kick him out of the house. He crashed with friends and continued his street art with his graffiti partner and school friend Al Diaz.

He was soon discovered by important gallerists in Manhattan and was represented by major dealers by the time he was 20. It was his international dealer, Bruno Bischofberger, who introduced him to Warhol. By 1983, at the age of 22 he became the youngest artist to show at the Whitney Museum’s Biennial. 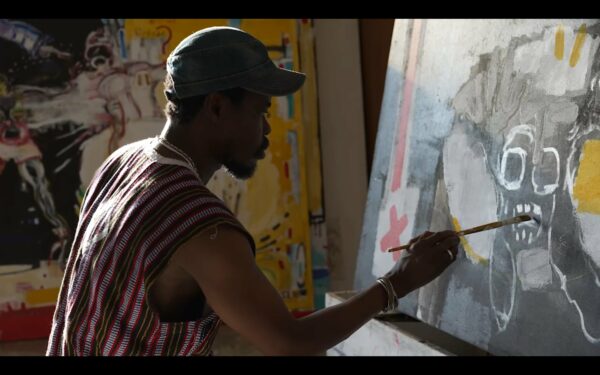 An artist working in the Ivory Coast in “Basquiat, Africa at Heart.” Photo courtesy of TV5 Monde.

In 1986, Bischofberger organized his trip to the Ivory Coast for an exhibition of his work at the French Cultural Institute in Abidjan. Although the show received only mixed reviews from its perplexed audience who considered the work shocking, his art resonated in a particularly strong manner with local African artists, most of whom had been rejected by the establishment of their community. One group of artists called the Vouvou, a derogatory expression used to imply worthless junk, was very taken by his work because it so closely mirrored their own. Poor, and without the means to purchase paints and canvases, they improvised with what they found in their villages working with cardboard, copper, animal skins, bark, and feathers. Their subject matter, much of which is seen in Basquiat’s work, reflected skulls, death, fear, and their black skin. Neither the Vouvou nor Basquiat had had any previous encounter; the similarities are striking. Although Basquiat had never been to Africa, he had what he explained was a cultural memory. As he said, “I don’t have to look for it. It exists. It’s there in Africa. Our cultural memory follows us everywhere.”

Basquiat later expressed that he was looking for a spiritual connection. It is, however, unfortunate that he seemed to disengage and refused to communicate with the artists who were eager to have a dialogue. The African artists explained that the primary function of art in Africa is to ward off evil, to push away suffering and desolation. They use many totemic symbols in their work, symbols that also, ironically, appear in the work of Basquiat. He then left for Cotonou in Benin. But it was a connection to an African artist he met in Paris in 1988, Ouattara Watts, that instilled in him the desire to return. He and Watts made plans to travel to the Ivory Coast together that summer. It was never to be because Basquiat died in August of an overdose. 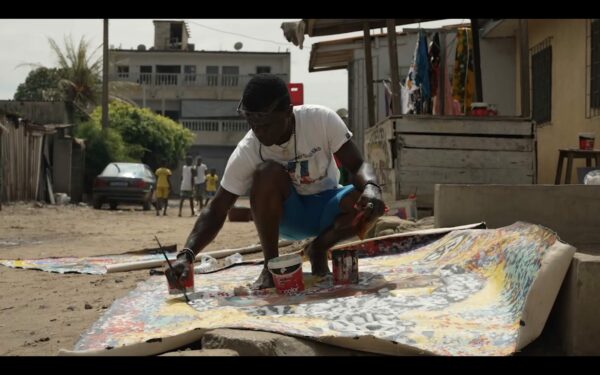 An artist working in the Ivory Coast in “Basquiat, Africa at Heart.” Photo courtesy of TV5 Monde.

This excellent documentary isn’t really about Basquiat’s art but more about the inadvertent influence he had in opening the doors for African artists who were working in a similar medium. Basquiat’s fame forced open the eyes of critics looking for the “next new wave.” The Revue Noire was a magazine founded in 1990 to highlight contemporary African Art. A series of international exhibits called African Remix soon followed. A museum was founded in Cotonou that featured local art and incorporated art education for the children of the area. The children really identified with Basquiat’s art and found ways to express themselves, always encouraged by the curators. It is the Zinsou Foundation that sponsored many of these art programs and in 2007 brought an exhibition of his work to Cotonou, funded by one of Basquiat’s major collectors, Italian Enrico Navarra, when no insurance company would underwrite it.

It is noteworthy  that almost all the experts interviewed are white, an unfortunately realistic reflection of the art world then as now. That being said, the input of Marie Cecile Zinsou, president of the Zinsou Foundation, is informative, compassionate, and educational. Of special interest are the views and opinions of the African artists that came in his wake. Seeing their work and hearing their explanations is a window into understanding the appeal of Basquiat’s work as well as their own. The circle is complete.

“Basquiat, Africa at Heart” was made for the French Language Channel TV5 MONDEplus, available by subscription through some cable and satellite providers and will be available beginning August 1.