City launches campaign to save lagoon 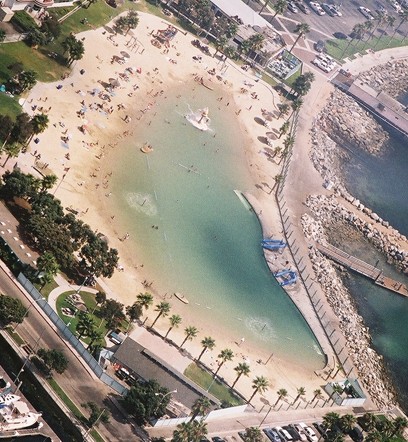 The saltwater pool at the Seaside Lagoon will not or. pen as scheduled this yea

A line has been drawn in the lagoon. And the troops are rallying on Facebook.

The City Council last week reacted to a potential $21.2 billion fine by suspending operation of the saltwater pool in the Seaside Lagoon, indefinitely. At the same time, Mayor Mike Gin launched a “Save Seaside Lagoon” Facebook page to spearhead an advocacy campaign aimed at a relaxation of water quality standards and potential fines that would enable the lagoon to reopen.

Gin said that the city hopes to obtain a new “Time Schedule Order” from the regulating agency, the Los Angeles Regional Water Quality Control Board, which would allow the reopening of the lagoon “as is” while the city seeks to address water quality issues surrounding outflow from the lagoon into the ocean.

“I don’t think anyone disagrees we all need to do our part in keeping the ocean clean, but we feel the potential civil maximum penalty of $21.2 billion was just outrageous…I think it would be fiscally irresponsible for us to continue to operate the lagoon as is with that threat hanging over our heads.”

The Facebook page has already attracted more than 2,000 followers.

“I wanted to make the public aware of what the council and I have been dealing with on this issue,” Gin said. “We felt especially, with the potential $21.2 billion maximum civil liability, we needed to engage the public on this issue, as well. It has gone beyond any expectations, in terms of how the lagoon has touched so many lives over the years – photos of weddings and baptisms and folks throughout the region and young folks enjoying the lagoon. I felt it was very important to reach a broader audience and to let people know what we are facing.”

But Samuel Unger, the assistant executive officer of the Los Angeles Regional Water Quality Control Board, said that the city doesn’t face a $21.2 billion fine.

“Staff had no intention to bring a number anywhere close to that to our board for approval,” Unger said. “Our view is that number doesn’t represent what is on the table and what staff is recommending.”

Unger said the $21.2 billion dollar maximum fine – identified by city officials in a regional water board PowerPoint presentation – was taken out of context by the city and simply represented the biggest potential fine as calculated under the federal Clean Water Act.

“That is a matter of law, really – it’s not our discretion,” Unger said. “Those maximum penalties are set by the Clean Water Act….It’s a statement of fact, really, but again, in this matter, staff was not recommending anywhere close to the maximum. Those calculations, those numbers, have been on the board 30 plus years in the Clean Water Act.”

Mike Witzansky, director of the city’s Recreation and Community Services department, said that the potential fine could nonetheless not be ignored.

“I understand what they are saying,” he said. “We have never felt they were going to impose that level of penalty, but the fact that the liability exists and is now stated in a public forum to that degree, calculated by their staff — that is still, in my mind, cause for alarm.”

Council members and residents have expressed outrage over the potential fines. Councilman Steve Aspel last week called the board’s stance “eco-green overkill” and said the council would not be “blackmailed.” Councilman Steve Diels suggested the agency faced a conflict of interest because it both imposes and is funded by water quality fines.

“If we continued to operate under a TSO and continued to have to pay fines, all we are doing is funding the organization that is fining us,” Diels said at last week’s council meeting. “If that were me, I would go to jail – if I made a decision that affected me financially.”

Unger said that the regional water control board was hardly guilty of overkill in that the city has had several years to comply with well-understood standards – under a previous Time Schedule Order in which the city agreed to comply – and strongly disputed any conflict of interest. He said that penalties actually go to a cleanup and abatement fund that the city itself could apply to for funds in addressing its problems.

“I would take exception to that, as well, because the penalties are paid to a state fund through the state water quality control board and they don’t go directly to our board or our staff,” he said.

The city contends Seaside Lagoon is a unique facility that is being held to impossible standards. The lagoon, built along with the harbor in the early 1960s, uses ocean water that is taken in by the AES power plant. The city chlorinates the water after its use – for cooling purposes – by the power plant, and then returns the water de-chlorinated to the ocean.

At issue is the amount of “total suspended solids” – sediment that make water cloudier – in the water the lagoon returns to the ocean.  The regional water quality board has fined the city for multiple violations of this standard. Witzansky said that a city study in 2007 showed that the “TSS” levels are only 6 percent higher in the outflow than in the water taken in; meanwhile, he said, the city’s chlorinization process rids the water of bacteria and, overall, makes it cleaner.

“We are not held accountable for the increase, we are held accountable for the entire TSS content, both preexisting and post,” Witzansky said. “…[But] water that has been chlorinated and de-chlorinated – you’ve killed bacteria and things that are nasty for human consumption. In general, you are dealing with water that has been cleaned for public swimming purposes and then returned to the ocean. The effluent materials we are being held accountable of are materials that exist in the ocean water before they enter our facility.”

Unger said that the issue is simply a matter of applying the law equally. He said the lagoon’s outflow is not unique insofar as several other facilities operate with a similar intake-outflow of ocean water.

“To a certain extent, every facility is unique,” Unger said. “We can’t really distinguish between dischargers as a matter of law. We have to be fair to all dischargers. There are other facilities that take water from the ocean and put water back into the ocean.”

“I would love to see a list of other public recreational water facilities that use ocean water in a safe, secure environment and then return it to the ocean chlorinated and de-chlorinated, and that operate solely for a public recreation benefit on state owned property and attract a regional visitorship,” Witzansky said.

The city’s advocacy effort hopes either to sway the water quality control board – which will not take up the matter again until its July meeting at the earliest – or possibly even address the matter legislatively.

Assemblyman Ted Lieu is sympathetic with the city’s cause but said that the fight would be an uphill battle.

“We looked into it and you would need changes at both the state and federal levels,” Lieu said. “So unless the federal Clean Water Act gets amended, it doesn’t really matter what happens at the state level. I am very happy to help and do what I can to get change, but you actually need to get a federal change, and that is difficult to do….It is a hard issue.”

Witzansky said the water control board has within its discretion the power to issue a permit that would allow the Seaside Lagoon to operate. He encouraged continued public support, via Facebook and letters and possible attendance at the regulatory agencies public meetings.

“We remain hopeful we can work out a solution with the board,” Witzansky said. “We would like to reopen the facility as soon as possible, and we need their help to do it, and hopefully recognition of our unique water reuse and recreational characteristics.”

“Our Seaside Lagoon is one of the assets that really makes our city unique – it’s a natural saltwater sandy-bottomed lagoon that you really don’t see anywhere else in the state or around the world,” the mayor said. “To lose the ability to have seawater in the lagoon and be able to operate like we have for over 30 years would be a tremendous loss to our community and region.” ER

5 Responses to City launches campaign to save lagoon