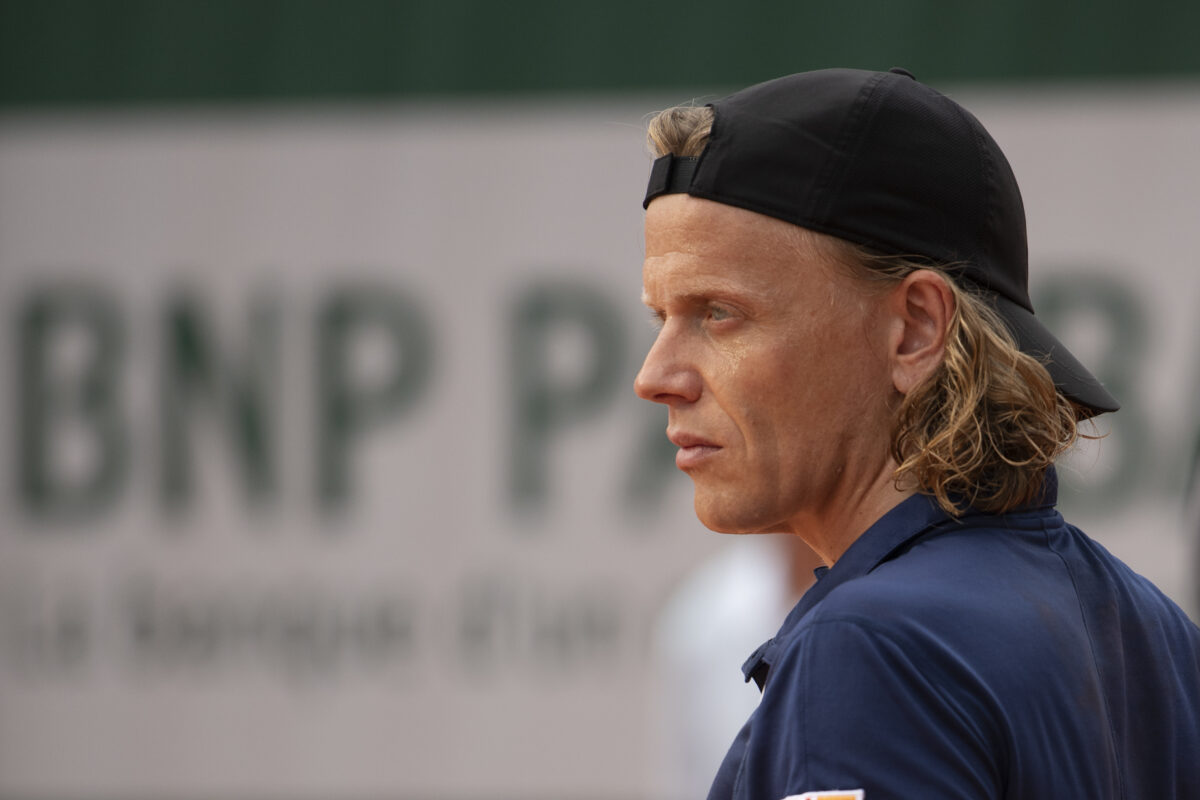 Character studies don’t get more intense or complex than Quentin Reynaud’s new film, “Final Set.” Integrating a compelling plot into the mix is a high bar to reach and Reynaud has catapulted himself over that benchmark in Olympian fashion.

Thomas Edison was once considered the great French hope in tennis but when he self-destructed at age 18 during a semi-final match at Roland Garros, the storied home of the French Open, that promise never panned out. Now he’s 37 with the scars of multiple surgeries to repair knees, hips, feet, and hands, barely supporting himself and his young family with the earnings he makes at minor tournaments. He longs for a wild card invitation to the Open but his ranking is well down in the 200s and even the smaller venues have stopped inviting him. He has placed the family in financial peril in order to continue the tour and now even those minor paydays have disappeared.

Thomas’ wife Eve gave up her own tennis career to care for their son with the agreement that she would be able to go back to school to pursue a course in sports’ management. They mutually agreed that he would take over her duties at home when her classes began. It was “the deal,” and that September deadline is fast approaching.

But before he leaves the court for good, he needs that one last shot at the French Open and a wild card would be his ticket. This is yet another pipe dream in his lackluster career. His ranking and performance in the last year, like all the previous ones, didn’t yield that invitation. There’s only one way to go. He’ll need to humiliate himself, enter the qualifying local matches, and win enough to get that wild card.

What happened to him? Everyone has a theory, as does he. Was it ultimately a lack of sustainable skill despite the obvious talent? Did he sabotage himself? Was it bad luck? Was it his mother, his original coach? In Freud’s eye, it’s always the mother. She didn’t support him enough; she gave up on him; she pushed him too hard; she didn’t push him enough; she wasn’t a good enough coach. Mother issues definitely loom in the background. Blame games are easy enough and he masochistically watches clips of his early self and sports’ commentary on his flameouts. He can’t help but notice the stories about the new teenage French hope, Damien Thosso, who is so much like him at that age with the same self-assurance, arrogance, and, above all, talent. But mostly, he watches later day clips of his mother proclaiming that he might not have had the mental stamina and heart to be a top level player.

The tensions between Thomas and his family are palpable. Everyone, from his doctors to his friends and family, encourages him to retire, to find something else to do. But there’s nothing else he wants to do; nothing else he can do. His drive to prove himself this last time is a mission born of dissatisfaction, sadness, and desire. Who is he if not this? He attacks the qualifiers as a man on fire. His mother, watching his matches, offers suggestions, not as a mother but as a dispassionate coach. His slow climb offers a tenuous lifeline to him but one that is a dead weight to his wife. 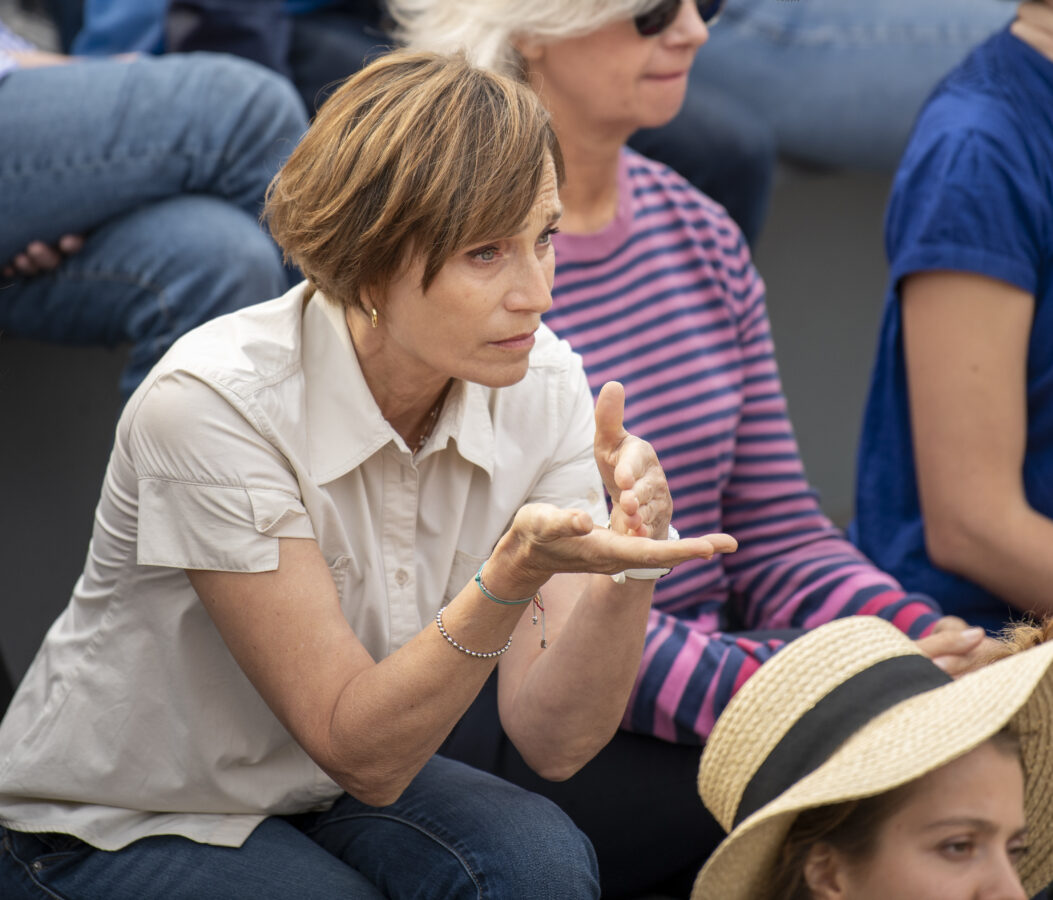 “Final Set” is a tense dissection of obsession, broken dreams, and narcissism. The script and direction, both by Quentin Reynaud, are airtight, floating a sine wave of ups and downs. He is vastly aided by his cast. Ana Girardot as Eve displays the complexity of someone who willingly gave up on her pipe dream with the agreement that at some point her time would come. But what if it’s never her turn? There is a simmering anger beneath her placid façade. Kristin Scott Thomas plays Judith Edison, Thomas’ mother and coach, with icy resolve that does not mask the love she feels for her son. She brings so many colors to her portrayal of the woman who may or may not be the root of his problems that you can’t help but imagine all the inherent conflicts when a parent coaches a child. Professional tennis was full of them and many of them were problematic. Andre Agassi’s father was violent; Steffi Graf’s father embezzled her money; Jelena Dokic’s father served time in prison; Mary Pierce took out a restraining order against her father. But this is not Judith who, for better or worse, was able to divorce motherhood from coaching. Whether that was a good thing is part of what underpins this story.

Alex Lutz as Thomas Edison is a revelation. A superstar in France for his improvisational comedy, he was theater trained. He has won the Molière (the French Tony) for humor twice and the César (the French Academy Award) as an actor in a film he directed and co-wrote called “Guy.” That he could plumb the depths of Thomas, a very dramatic role, is only mildly surprising given his timing and the complexity of the comic roles he has essayed in the past. That “Final Set” is as compelling as it is rests almost entirely on his shoulders because the excellent supporting characters are just that, supporting. If Lutz had not taken flight in portraying all the conflicting emotions of a man haunted by failure, the film would have been interesting but nothing special. A film this self-focused on the main character lives or dies with the actor at the center. Lutz is that kind of actor.

The cinematography by Vincent Mathias combined with Jean-Baptiste Beaudoin’s editing produce some of the very best tennis footage portrayed in the movies. As an aside, it’s interesting to note that before this film, Lutz had never played tennis. His months of pre-film training and intensity combined with an excellent tennis double and look-a-like named Frédéric Petitjean make the matches look seamless and all the more authentic.

This story has been done before, many times, but “Final Set” avoids all the usual tropes. It’s a must-see.

Premiering at the Laemmle Royal on August 27.