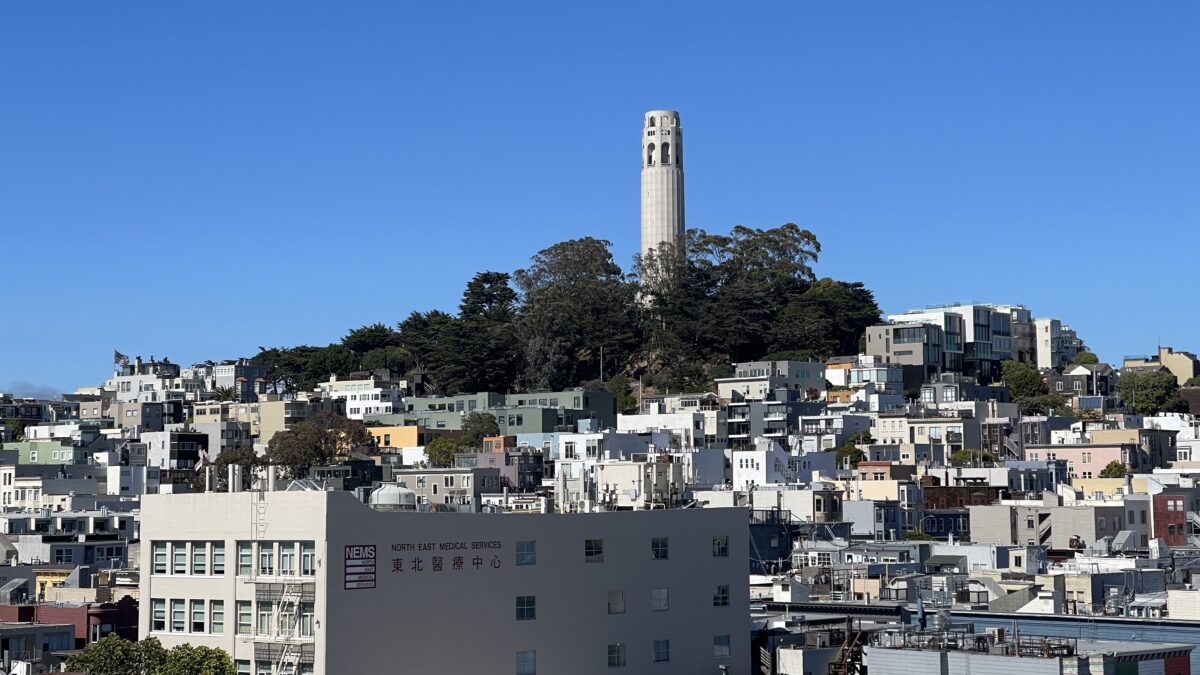 San Francisco's Coit Tower, on Telegraph Hill, by Jefferson Graham for the PhotowalksTV series
There is no beach in San Francisco’s North Beach.
There was, once upon a time, before it got filled up and replaced with streets and buildings.
But what has remained constant: a huge Italian community. It’s not as big as it once was, but the spirit of the Italian culture and food lives on, in perhaps a larger way than I’ve seen in other cities.
In the latest PhotowalksTV episode, I continue retracing the steps of my late dad Jerry, who hosted a local San Francisco travel show in the 1980s and 90s called “Bay Area Backroads.” I recently got ahold of some of his old tapes, had them digitized, and reunited with my dad in a way, by revisiting North Beach with him. Be sure to click the link directly above and let me know what you think of the episode.
North Beach has been a big part of my life for years. I’ve been traveling from the South Bay to San Francisco for some time, and I always stay in North Beach, at the venerable Columbus Inn, because it’s affordable, has free parking, and is walking distance to so many great places.
There’s no place in the city I’d rather be.
By my last count, there were 8 amazing Italian restaurants within 8 blocks of the Inn–with three of them just 4 blocks away. All told, once you add the side-streets, there’s about 30 great Italian restaurants in the district. 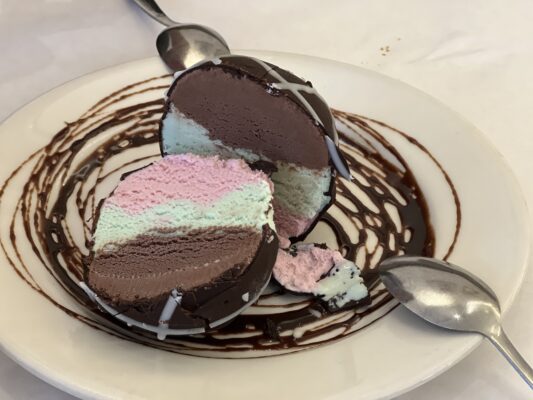 Best spumoni ever, from Luisa’s in San Francisco, by Jefferson Graham for the North Beach PhotowalksTV episode 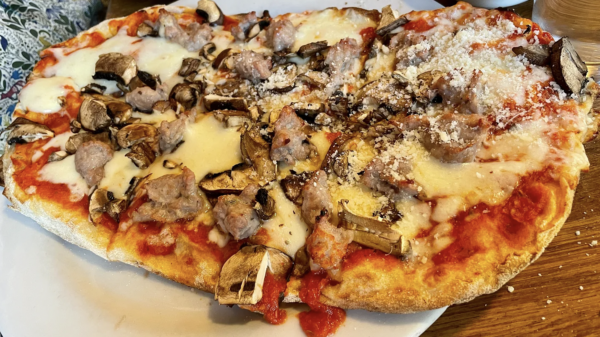 Let me single out two highlights:
The best spumoni (chocolate covered) I ever had was from Luisa’s and the pizza goes to Piccolo Formo, both on Columbus Avenue. The pizza is “pinsa” style which is made with a more rustic, freeform crust that’s pressed down with the fingers rather than rolled out. The pinsa you see below was covered in marinara, mozzarella, mushrooms and homemade sausage. Yum! (For more on the great foods of North Beach, check out RuthTalksFood’s take here: https://ruthtalksfood.substack.com/p/buon-appetito-from-north-beach 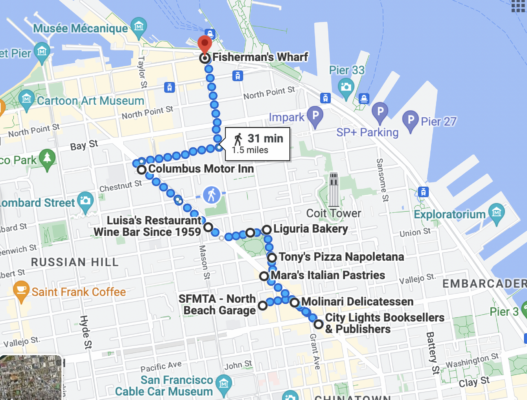 So what to do in North Beach?
That’s easy. You’re going to walk, explore and eat, and of course, take lots of photos.
In fact I have a photo assignment for you: your object is to capture the Italian culture in your photos: the flags, the logos, the pasta, cannoli, pizza, gelato, signs, people.
I’ve selected 10 great highlights for you to explore and hit on foot. Just remember to go down every alley and corner as well, because that’s often where the magic is. Additionally, Coit Tower and crazy, windy Lombard Street are side trips. Use this post to plan your trip, and add these two anywhere you like. 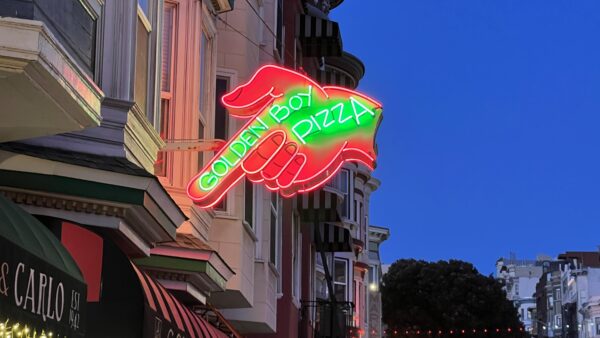 North Beach Garage: 735 Vallejo. Park your car here, if you have one, or not. If on foot, take the elevator to the 5th floor of the lot, which has the best free overhead view of North Beach, from all sides.
Molinari’s Deli: 373 Columbus. The 100+ year old old-style deli is swimming in Italian classic meats and goods, and nowhere in North Beach will you find a better, heftier sandwich. You can also buy homemade ravioli and other pasta to take home.
City Lights: 261 Columbus. This high end bookstore, once a hangout for the beats of the 1950s like Jack Kerouac and Allen Ginsburg, is still going strong today and will keep you busy for hours.
Mora’s Italian Pastries: 503 Columbus. Like cannoli? (“Take the gun, leave the cannoli” is a line you’ll hear a lot in North Beach. It was used in the classic 1970s film “The Godfather.”) By my research, Mara’s, a little hole in the wall bakery, has the best creamy cannoli in town. The gelato isn’t as good–we recommend going next door to the full service gelato parlor, Alimento for more.
Tony’s Pizza Napoletaria: 1570 Stockton. Also said to have the best pizza anywhere. Long lines usually stop you from going in, so Tony opened a small take-out place for slices next door. But many swear by another take-out joint, Golden Boy Pizza, across the street from Tony’s at 542 Green Street, where “it’s hip to be square.” Golden offers Chicago style, deep dish pizza, sold in square pieces. You’ll see long lines here too. 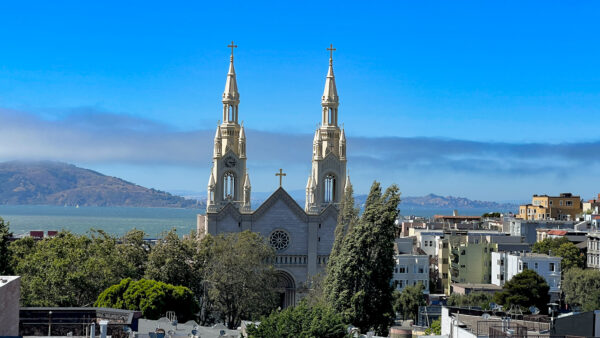 The Saints Peter and Paul Church in San Francisco, by Jefferson Graham for the PhotowalksTV series

Liguria Bakery: 1700 Stockton. Even more long lines here, which stretch for blocks on any given morning for this classic Italian flatbread, like a cold pizza. That’s all this bakery sells, albeit in ten different varieties. The lines are so long, this will be a great opportunity to meet some locals and hear Italian being spoken.
Saints Peter and Paul Church: 666 Filbert. The church, in the heart of Washington Square, has dominated the skyline of North Beach since 1924. It’s a stunner, and worth seeing, no matter your view on religion. This is where Marilyn Monroe married baseball great Joe DiMaggio back in the 1950s. Photo tip: this is one big church. Your best spot for a great shot is from the Vallejo Street parking lot. And it looks especially cool at nighttime.
Luisa’s: 759 Columbus. The aforementioned home of the best spumoni ever, a wonderful Italian restaurant that’s been in business since 1959.
Columbus Inn: 1075 Columbus Avenue. Free parking, comfy rooms and location, location, location. Also affordable. You’ll need to stay somewhere in the city–why not in the heart of North Beach? 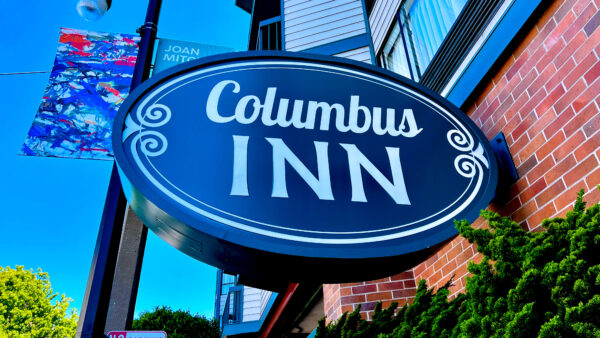 Fisherman’s Wharf. It’s honky tonky, full of tourist shops and chain restaurants. That’s at first glance, however. You can also pick up a water taxi or boat ride for an unbelievable song (around $20) to catch a nice ride under the Golden Gate Bridge (now that’s a photo opp!) On the right side of the Wharf is the famous Boudin’s, home to fresh-made sourdough and to the left is the Buena Vista Cafe, known for inventing Irish Coffee. 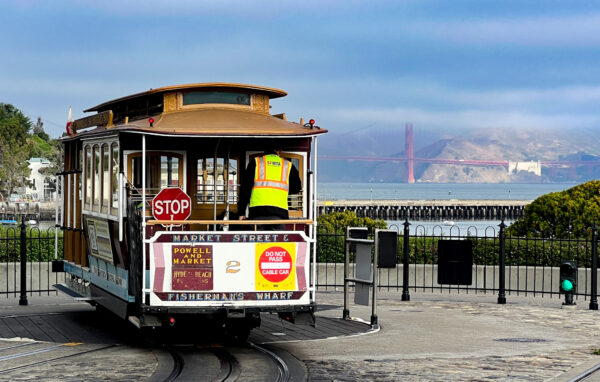 In Fisherman’s Wharf, the Powell/Hyde line awaits customers, and is parked with the Golden Gate Bridge in the background. By Jefferson Graham for the PhotowalksTV series

Forget that claim to fame, and get in line for the Powell/Hyde cable car line that starts directly across the street. This is where, for $8 one-way, you’ll get your best, unobstructed shot looking down at Alcatraz Island, from Hyde and Lombard. Speaking of the world’s crookedest street, you’ll also get a great shot of the street from the car, without having to climb to the top of the hill, which can be grueling. 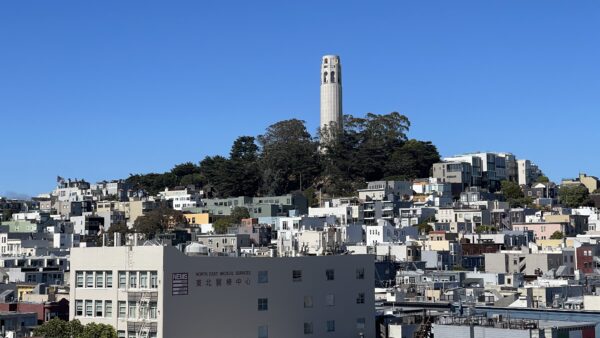 Beyond eating great Italian food and sipping Italian sodas and coffees, many tourists like to visit Coit Tower, a 210-foot art deco tower that offers a 360-degree view from the top of the city, from the Golden Gate Bridge that leads to Marin County to the Bay Bridge leading to Berkeley and the East Bay.
I go to Coit every time I’m in San Francisco, and love walking up the hilly streets to get up there. The views are that incredible. If you don’t like climbing, public transportation can take you up there.
Remember I told you that the best free overhead views are at the Vallejo parking garage? This is true. But if you can spare $10, I highly recommend taking the elevator to the top of the tower–which is where you’ll really see the views. Shrubbery covers much of it from the parking lot. 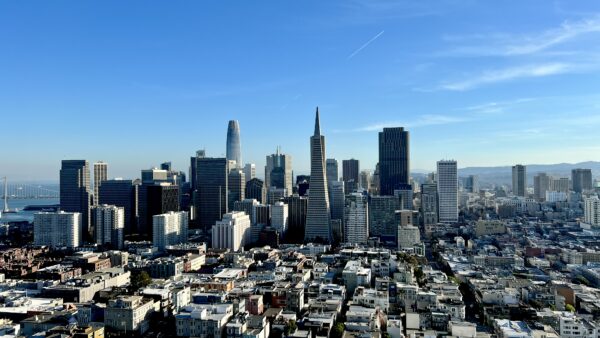 San Francisco skyline from Coit Tower, by Jefferson Graham for the PhotowalksTV series

In my travels around San Francisco, I have picked up my best shot of the city skyline from up here.
Whether it’s an afternoon, evening, weekend or even longer, you’ll find plenty to keep you busy in North Beach. Sadly, several of the old-line Italian restaurants have passed on in recent years, but the good news is, there’s still so many others still going strong. Go support them and help them get to the next century!