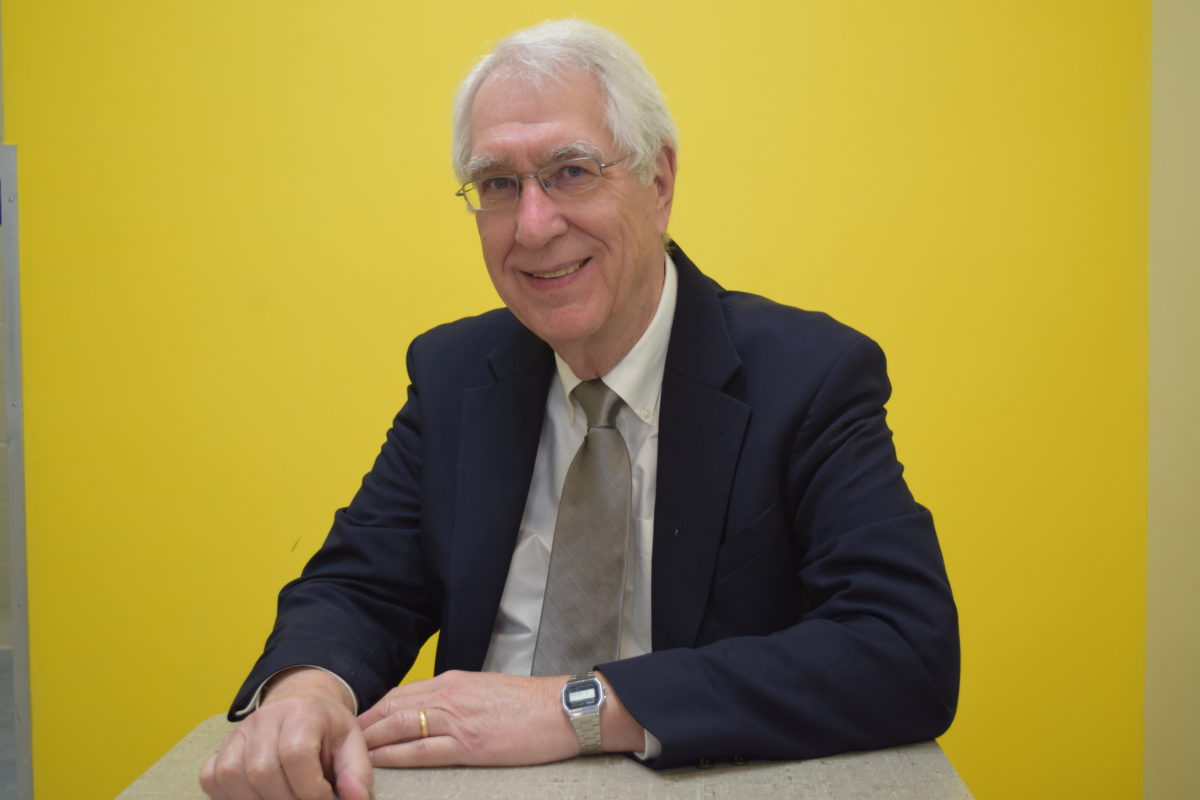 This past October, Jim Eninger was among the recipients of the Excellence in Arts Awards, an annual event presented by the City of Torrance Cultural Art Commission. If the name doesn’t ring the bells of familiarity that’s because Eninger is perfectly content to remain in the background. That isn’t to say he doesn’t have admirers and champions. The late John Bogart of the Daily Breeze referred to Eninger as “the smartest, best-educated publicist in the South Bay and – who knows – maybe the entire world.”
Many people who follow classical music would surely agree.

Adams and Adès to Zimmer and Zorn
From Jim Eninger’s Torrance home you can throw a stone into Redondo Beach. He’s a retired engineer who graduated from Stanford and worked at TRW. Along the way, his interest in classical music grew by leaps and bounds. While he himself may not play an instrument, his wife and daughters are musically inclined.
In the late 1970s, long before all the gadgetry came along that now pins us to our phones and computers, Eninger became involved with the South Bay Chamber Music Society. Then, when the internet became viable, and being somewhat computer savvy, Eninger began sending out concert reminders as well as the evening’s program notes: “And people would show up at the concerts, (having) printed out the programs on their dot matrix printers.”
These emails boosted attendance, to the point where a Sunday afternoon encore performance was initiated to supplement the one on Friday. The visiting musicians liked this as well, since if they were preparing for one concert it was nice to be able to present it again, the same material and all, just two days later.
The format continues to this day, Fridays at Harbor College in Wilmington and Sundays at the Pacific Unitarian Church in Rancho Palos Verdes.
Having been on the board, as well as serving as the group’s president, Eninger left the South Bay Music Society in 1999, and that’s when he began his newsletter, now referred to as the Clickable Chamber Music Newsletter from the South Bay.
“During the season, from September through June,” he says, “they go out weekly because there’s so much classical music. And then when things slow down during the summer sometimes they go out every two weeks or maybe every three weeks if I want to schedule a vacation.”
For all that, they’re sent out regularly, the most recent issue (as of this writing) is number 781, and there are in excess of 5,700 people who subscribe to it.
Also, and most importantly, the newsletter is thoroughly comprehensive, giving the date and time, the names of the artists, the location, etc., of dozens upon dozens of classical music events coming up throughout the greater Los Angeles area. 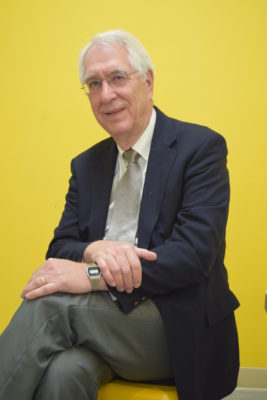 It’s a formidable undertaking, and yes there are volunteers who serve as proofreaders and fact-checkers.
Eninger is in his early 70s, but he doesn’t seem to mind the trek to venues near and far. On the day we met, he was headed over to Zipper Hall in downtown Los Angeles.
“There’s a group of friends that I see at concerts all over the city,” he says. “The distance to go to a concert is a secondary consideration.
“And one thing about attending classical music concerts, you really get to know your city. Going to Pasadena, Westwood, downtown. It really makes you feel connected.”
That’s a good lesson for those of us who automatically cite traffic as an excuse to not venture out of the area.
But let’s say we don’t (or won’t) leave the South Bay in pursuit of classical music. That’s okay, too, because Eninger says there’s quite a bit of it locally, and a glance through his newsletter gives plenty of proof that this is so.
To mention a few, apart from the South Bay Chamber Music Society, we have Classical Crossroads in Torrance, plus occasional concerts at El Camino College, numerous churches, and one shouldn’t forget Alexey Steele’s Classical Underground in Carson.
There are also many notable classical musicians who live in the area or who play here frequently. Most people know of David Benoit and the Asia America Symphony, but Eninger singles out two fine pianists, Robert Thies and Steven Vanhauwaert. Thies was recently named the artistic director of the South Bay Chamber Music Society, and Vanhauwaert, originally from Belgium, resides in Redondo Beach.

Music is a journey
Eninger says that when he began listening to music he wanted to keep an open mind and so he listened to many genres. This is how we discover what it is that appeals to us most directly. In Eninger’s case, he seems to prefer the Germanic tradition, Bach to Brahms, and then into the 20th century with predominantly tonal music. But he emphasizes that he enjoys a wide range of music, his criteria being that the artists are exceptionally talented and the music is well-played.
“I like to expand my horizons,” he notes, pointing out that at the moment he’s carefully, slowly, reading “The Rest is Noise,” by Alex Ross. “If you want to understand music in the 20th century, that’s an essential book to read.” In addition, Eninger says, “I’ve been reading biographies of the great composers – Clara Schumann, Robert Schumann, Prokofiev, Brahms… because these biographies also reflect on the history of the time. It’s a great way to learn about history.”
These days, at least, Eninger prefers chamber music over symphonies, because with chamber music there’s a drawing room intimacy that can’t be achieved with a Mahler-sized orchestra.
“What I’m really getting interested in now is American Contemporary Ballet; it’s almost like chamber ballet. When you attend one of their performances (located in a highrise on Flower Street in downtown L.A.) you’re only at most three rows from the dance floor.”
The dances are accompanied by live music, “most of the musicians drawn from the USC Thornton School.” Eninger is hoping to bring this mixture of dance and chamber music to the South Bay.
One of the questions that people ask about classical music of all types, including large-scale opera, is what happens after the audience becomes too feeble to attend and, ahem, dies off? Because, if one goes to see “Così fan tutte” or even “Rigoletto,” most of the seats seem occupied by those in or nearing their sunset years.
“Well, there’s always new people coming in,” Eninger explains. In other words, while some folks go out one door, others are coming in from another. And actually, Eninger thinks this is a good time for classical music attendance because the baby boom generation is reaching that point in their lives where, presumably, they have more leisure time and, furthermore, Led Zeppelin just isn’t cutting it anymore.
As for luring a younger audience, Eninger often sees students who were sent by the teachers of their music appreciation classes. “I love to see how they get drawn into it,” he says, “because they don’t have high expectations for this [kind of music], and then they really like it.”
While Eninger is pleased to see students in the audience, he doesn’t think the concerts should kowtow to them.
“There are some organizations that are trying to chase younger people by making their presentations more hip or including things that kids like. I don’t believe in that.” He also feels that sometimes a group or presenting organization needs to put aside the notion of just trying to draw in as many people as possible. An art song recital, for example, Eninger says, “where you know your audience is going to fall by 30 or 40 percent, but you do it anyway.”
That’s conviction, and integrity, even if it’s going against the grain of filling seats at all cost. But it’s also admirable, that openness to finding and presenting true gems in music and by doing so to offer a unique and one hopes exceptional experience.
“When you come to a concert that’s played by talented musicians who give an inspired performance of great music by great composers, then something magical happens,” Eninger says. “The entire focus should be on the artistic quality, and the audience will come.”
Revelations await us in the realm of live classical music, and Jim Eninger is our guide and travel companion. His clickable newsletter is just that, a click away. Email a request to JEninger@Yahoo.com or go to palosverdes.com/ClassicalCrossroads/ConcertReminders.htm ER