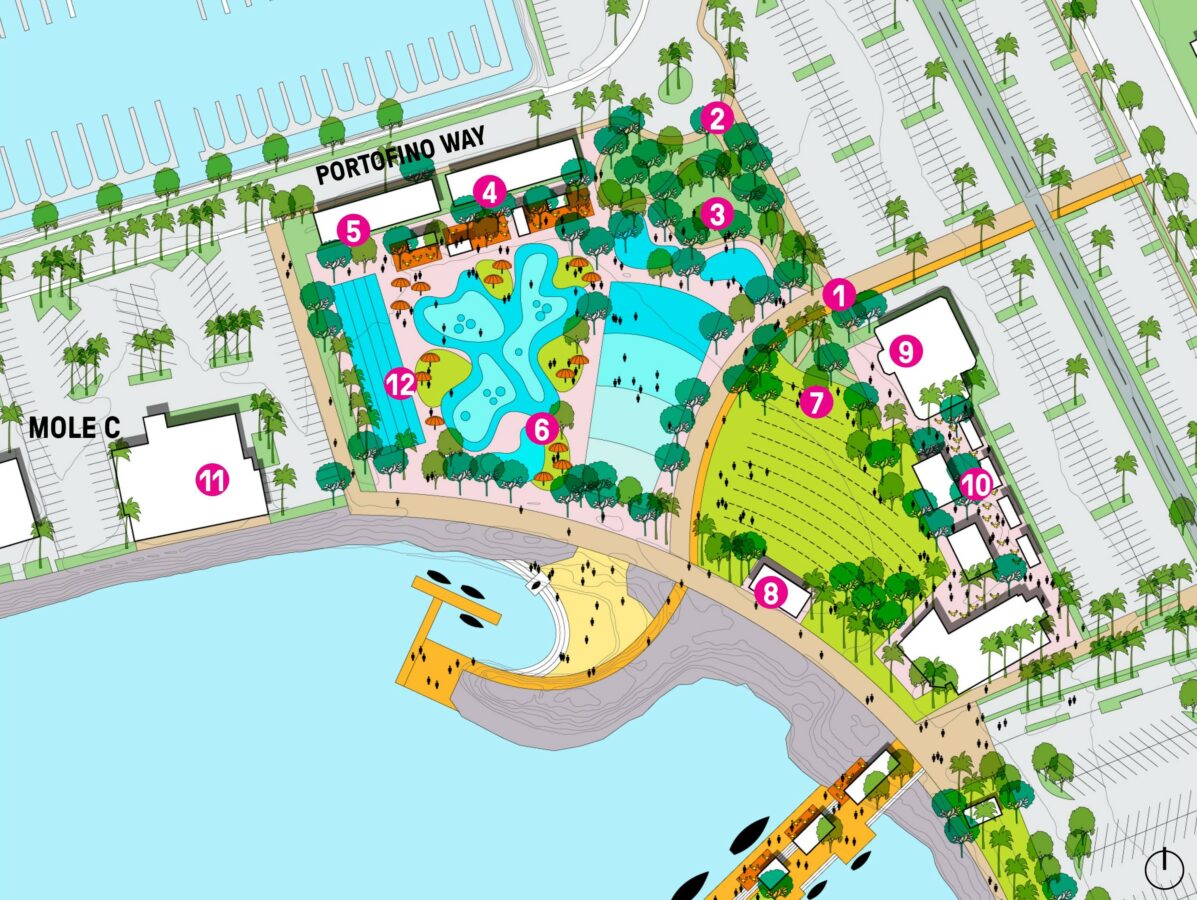 Phase Two of a city effort to revitalize King Harbor amenities continued Monday night with drawings shown to the public on potential changes.

For Seaside Lagoon, noting it as “the civic heart of King Harbor,” SWA’s Jeremy Klemic showed two main approaches, a more “passive” open public lawn next to a smaller lagoon; and a second “aquatic development” with water jets, a wave pool and lap pool – also part of a smaller lagoon with adjacent public lawn for year-round use. Each option provides for a direct path to the oceanfront and a possible bandshell.

For the closed sportfishing pier, SWA showed a spruced-up structure, with “dock and dine” areas for small and large watercraft, and fishing spots. The first part drew positive comments from the public, while the second, questions.

“The more I see this, I think the sportfishing should be taken off,” said Nora Wills.

“Fishing and motorboats do not mix, at all,” he said.

Drawings for a public boat launch and dinghy dock brought some skepticism.

“Looks like an awful lot of concrete jungle,” wrote one member of the public in the chat box. 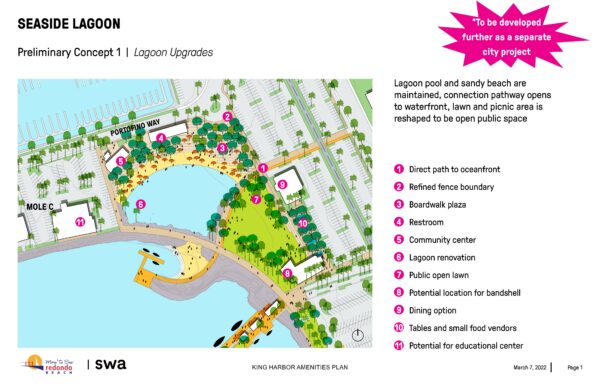 Preliminary Concept 1 shows a smaller Seaside Lagoon, next to a public lawn with possible bandshell. A path makes for direct access from the parking lot to the oceanfront. Courtesy of SWA Group. 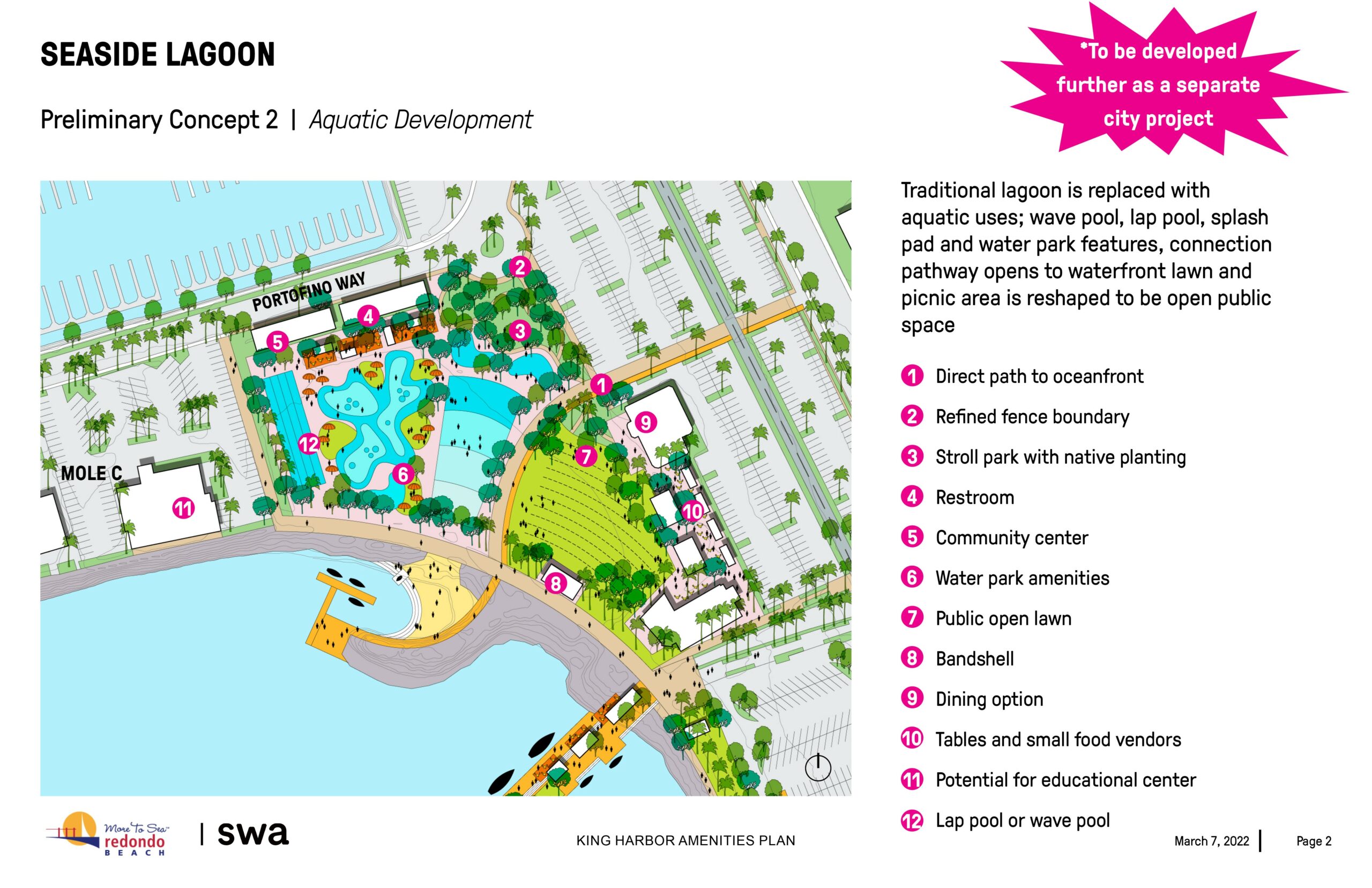 Preliminary Concept 2 from SWA and detailed information at the right. Courtesy of SWA Group.

For Moonstone Park, SWA showed three options; an enhanced existing park, a smaller park with expanded Lanakila Outrigger Canoe Club next to it; and a minimal park with dry-boat storage.

The enhanced existing park option was dominant in the feedback.

“Our goal isn’t to create less green space,” said Moses Rambler, Lanakila Outrigger Club president, noting that they just seek a slightly larger access to the water. “With a little bit more space we can bring more people down to use the (outrigger hand launch).”

A member of the public put forth an idea to expand Moonstone Park — to take it to the north edge of the spit, removing a section of parking lot. 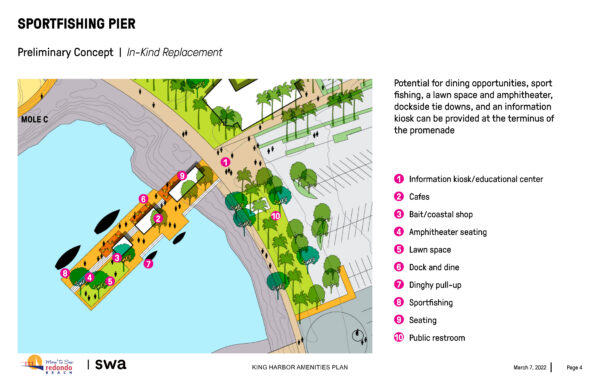 Another resident suggested moving the outriggers’ launch to Mole C.

Moles are the man-made alphabetized land masses at King Harbor – from Mole A at the north end (King Harbor Yacht Club) to Mole D at the south edge by the International Boardwalk.

For the Boardwalk, no major changes were shown by SWA, other than revamping restrooms, retro-fitting for sea level rise and adding greenery. Public comments included requests for mini-amphitheaters, busking (street music performance), to bring back the arcade and add a carousel. 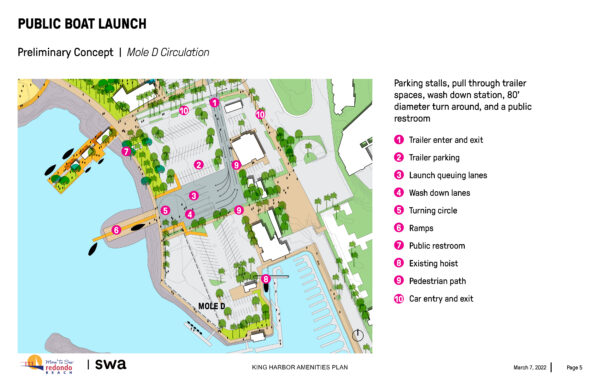 A public boat launch would be a new addition to King Harbor. Courtesy SWA Group.

While the King Harbor Amenities Plan focuses on the seven main features above, Seaside Lagoon is the most immediate.

Brandy Forbes, community development director, pointed out that improving the spot is a current city project, with a budget coming together and preparation underway to go out with a request-for-proposals. SWA’s work will be incorporated in this.

Next for the harbor amenities plan, SWA is to offer a full draft package for each feature, invite feedback and hold another community meeting in April.

Further input on Monday’s presentation may be given at KHAmenitiesplan@redondo.org. ER