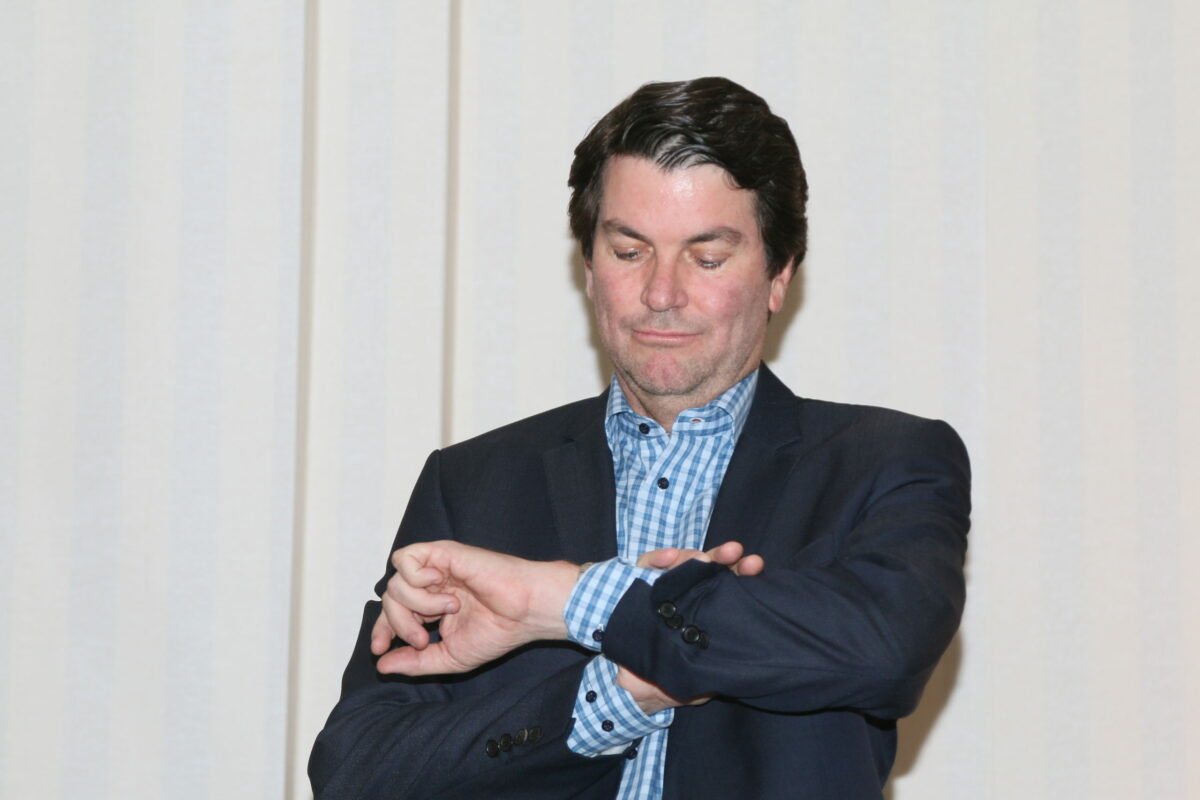 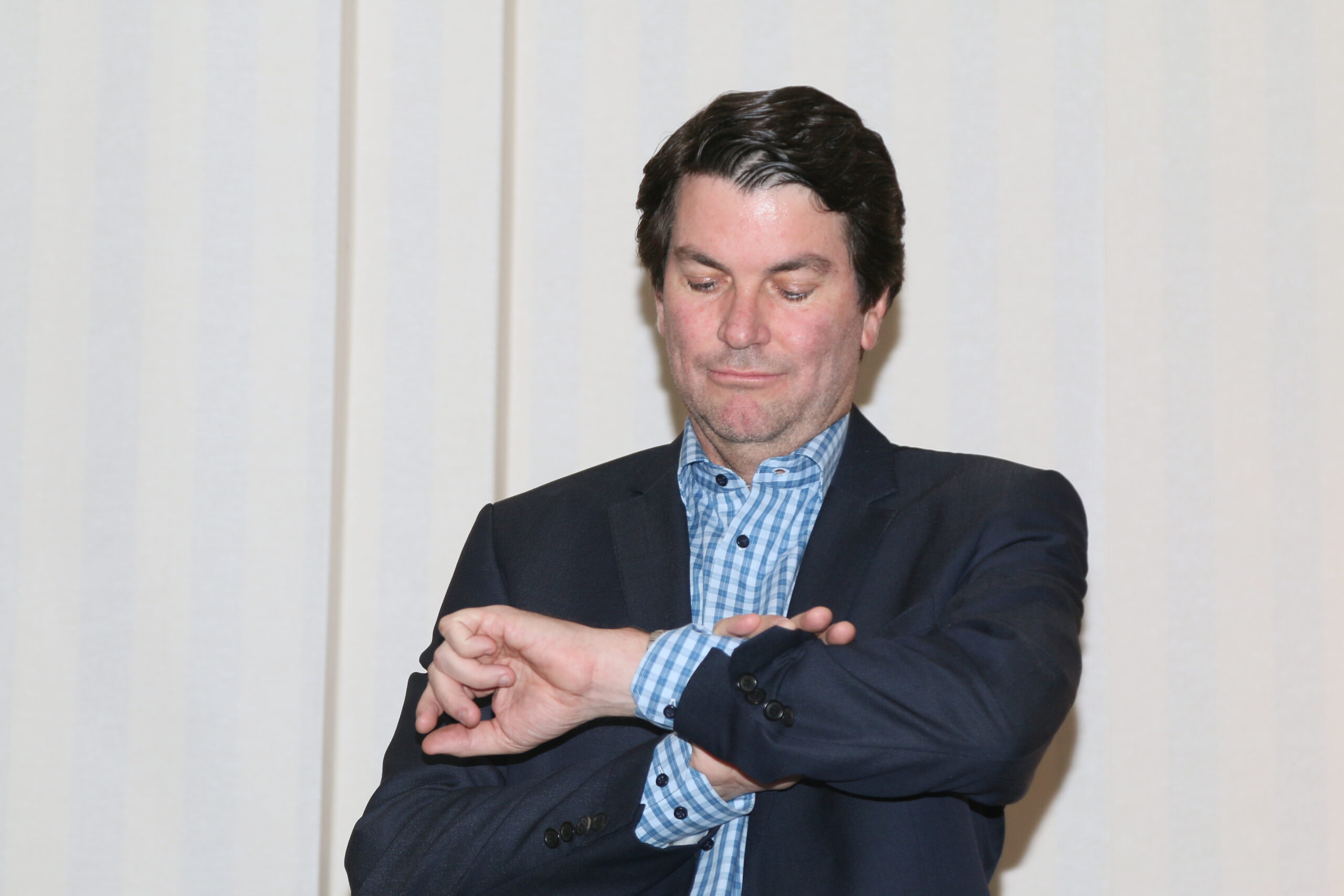 Redondo Beach Schools Superintendent Steven Keller being facetious at a city award ceremony in 2015 honoring him as Man of the Year. Easy Reader file photo

The Redondo Beach Unified School District (RBUSD) has postponed the planned reopening of some classrooms from next week to Jan. 4.

Then, on Dec. 7, L.A. Unified School District’s superintendent announced the suspension of all L.A. Unified school-based instruction amid the release of data showing a record-high number of Covid-19 cases in the county. Following discussions with the district’s think tank and with elementary school principals, RBUSD staff decided to amend its timeline.

“I think that postponing is the right thing to do,” board member Michael Christensen agreed. “I mean, it’s not only that it feels right to do it but I think the science is there to say that it is a wise thing to do all the way around.”

The amended timeline puts students in transitional kindergarten and kindergarten back on campuses beginning Jan. 4, the day after winter break ends. The students will be divided into “cohorts,” or groups of 12, and will alternate between two or three days a week of in-person instruction and days of distance learning. This is part of what the district is calling its unique “hybrid” model. The newly proposed timeline puts the first cohort of first and second grade students back into classrooms on Jan. 11.

“If we need to revisit those dates, we certainly can do that,” Christensen said. “But I think it’s important we have something out there so we can start planning because one of the real challenges that I’ve seen both personally in my family and professionally through this pandemic is the uncertainty. We’re trying to interject a little bit more certainty or little bit of planning the best we can in this whole process.”

At Tuesday’s school board meeting, parents and teachers expressed concerns, through letters and in person, about surging numbers of Covid-19 cases.

Holly Frame, a science teacher at Redondo Union High School and the parent of a second-grader at Beryl Elementary, asked the board to “please consider holding the brake” until 10 or 14 days after the winter break, giving families time to quarantine after post-holiday gatherings.

“I’m aware that many families plan to travel and gather with people outside their house over break, increasing the chances of exposure,” she wrote. Melissa Rummler, a teacher at Adams Middle School and the parent of a second-grader at Tulita Elementary, suggesting waiting two or three weeks after the break.

A letter signed by eight families in the district said there is “no reason to rush students back to campus while local rates are soaring — indeed, at their highest levels ever — and while the district is experiencing positive cases on its campuses.” The letter asked the board not to return students to campus any earlier than Jan. 19.

“As a community, we are collectively experiencing pandemic fatigue and we all know families will become more lenient regarding mask and social justice requirements as well as the state’s current guidelines regarding quarantining after travel. We urge you to consider imposing consequences upon families who opt not to follow those guidelines as well as other mandates imposed at the county state or federal level.”

A parent of a student in the district, who is also a physician, wrote that hospitals are filling up.

“We fear they will become too overwhelmed to care for the community,” she wrote. “Cases are rising in each of the Beach Cities over the last two weeks. The mayor, governor, and Health Department are asking us to stay home and do our part.”

Leila Hirchert, a second-grade teacher at Alta Vista Elementary, wrote that she’d encountered very few people who were comfortable with sending kids back to classrooms in January.

A team of second-grade teachers from Beryl Heights Elementary, with a combined 70 years of experience, wrote that it was the first time they felt compelled to reach out to the school board.

“To say we are concerned is an understatement,” they wrote. “We are seasoned educators but our stress has turned to fear and even panic as we watch the numbers increase in L.A. County at such a rapid pace.” They asked that the school board “show us we matter. Show us our students and their families matter.”

“We look forward to the day when this pandemic is a thing of the past. In the meantime let’s get together and support one another. Please.”

Another parent wrote that listening to “the clamor of parents asking RBUSD to take their kids now” is unwise.

“Please hold firm,” he wrote. “The problem parents you are [dealing with] is a monkey that should not be on the back of RBUSD. Get this monkey off your back and focus on your kids and staff. Do what’s hard and what’s right.”

Monica Joyce, president of the Redondo Beach Teachers Association, reiterated the union’s position that it seems unsafe and unwise to return to classrooms at this point.

“Right now the number of cases continues to rise each day in the South Bay,” she said. “As Beach Cities Health District has reported to the think-tank, the rate of infection is higher now than it has been atn any other time during the pandemic. More people are being tested but a much higher percentage of them are also testing positive. … We want to teach our students in person but we need to be assured that it is safe for them to return.”

Following the public comment period, board vice president Raymur Flinn said, “We have an obligation to do what’s being asked of us.”

Board president Brad Serkin added that the proposed dates are fluid. He said the board would not make any decisions that threatened the health and safety of students, teachers, and staff, but that reopening schools was also a pressing matter considering the mental, social, and emotional impacts of distance learning on students.

“[Nobody] wants to put anybody in harm’s way, but the reality of the situation is if we continue under the premise of waiting until it’s completely safe, I would argue our kids will never return,” Serkin said. “What I mean by that is we have the flu, we have other things going around. The reality is the L.A. County Department of Health, even as they’re telling all of us to stay home, are still issuing waivers and still telling people to go back to school.”

Dr. Susan Wildes, the assistant superintendent of educational services, said at Tuesday’s meeting that district staff is working diligently to plan for a return to classrooms.

“We want to say to parents: we know that in-person instruction obviously is our number one goal,” she said. “That is our north star.”