The Longboardsman: Iraq veteran to skate 101 miles up Strand in a day 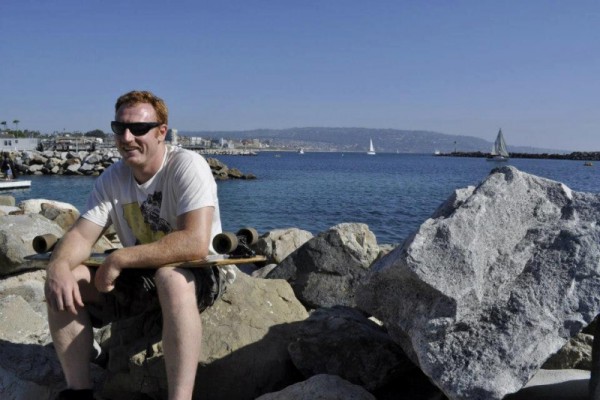 Andrew Goldsmith, at the rocks of King Harbor, will skate 101 miles in a day up and down the Strand from Torrance Beach to Malibu. Photo by John Castillo.

He could never do an ollie or a kick-flip. He was more of a distance skateboarder.

Now a married Army veteran and law school graduate, Andrew Goldsmith prepares to ride a longboard 101 miles in one day to benefit the International Medical Corps for its work in Ukraine.

His feat is set for Aug. 7, in the early-morning of which he will ride from his South Redondo house to Torrance Beach, get on the Strand and push all the way to Malibu, and back, and up and back again, up to Marina Del Rey and back.

A veteran of a 37-day skate of the California coastline and a three-day ride through the Florida Keys, he has not yet done a single-day project.

“I’ve never pushed myself like this. It almost seems impossible, so I just wanted to train for it, give it a shot. I’ve never gone this far.”

“I had a great cheeseburger on the Santa Monica Pier when I was training last week,” he said.

He grew up in Redondo Beach, a four-year junior lifeguard, and graduated from Redondo Union High School in 2003. After a restless year at El Camino College, Goldsmith enlisted in the Army, later serving two tours in Iraq, in 2006 and 2008.

“Night and day difference,” he said of before the 2007 troop surge and after.

After five years as a soldier, he went to the University of Hawaii (Manoa) for a degree in philosophy, then Pepperdine for law school.

Junior lifeguarding was a preview of the physical work to come.

“That was such a tough, good program for kids,” he said. “Back at school you could always kind of spot the junior lifeguards. Fit and tanned.”

For his ride Aug. 7, Goldsmith chose to support International Medical Corps, requesting that funds he raises go to its work in Ukraine since the Russian invasion.

“They’re reputable, big enough that you’ve heard of them and they are doing the most good over there,” he said. “I always had the utmost respect for the medical field. As an infantry soldier, I was more on the destruction side.”

Goldsmith’s Strand training continues this week with rides to jujitsu class in Torrance and a long skate of the whole Strand Saturday – to Will Rogers State Beach in Malibu and back.

He pays extra attention to drinking water and “eating constantly” to avoid cramping.

In the end, Goldsmith hopes to draw on his strengths.

“I was always terrible at trick skating, but what I could do is get around all over town,” he said.

A GoFundMe page has been set up for donations, “Skateboarding 101 Miles for Ukraine” at