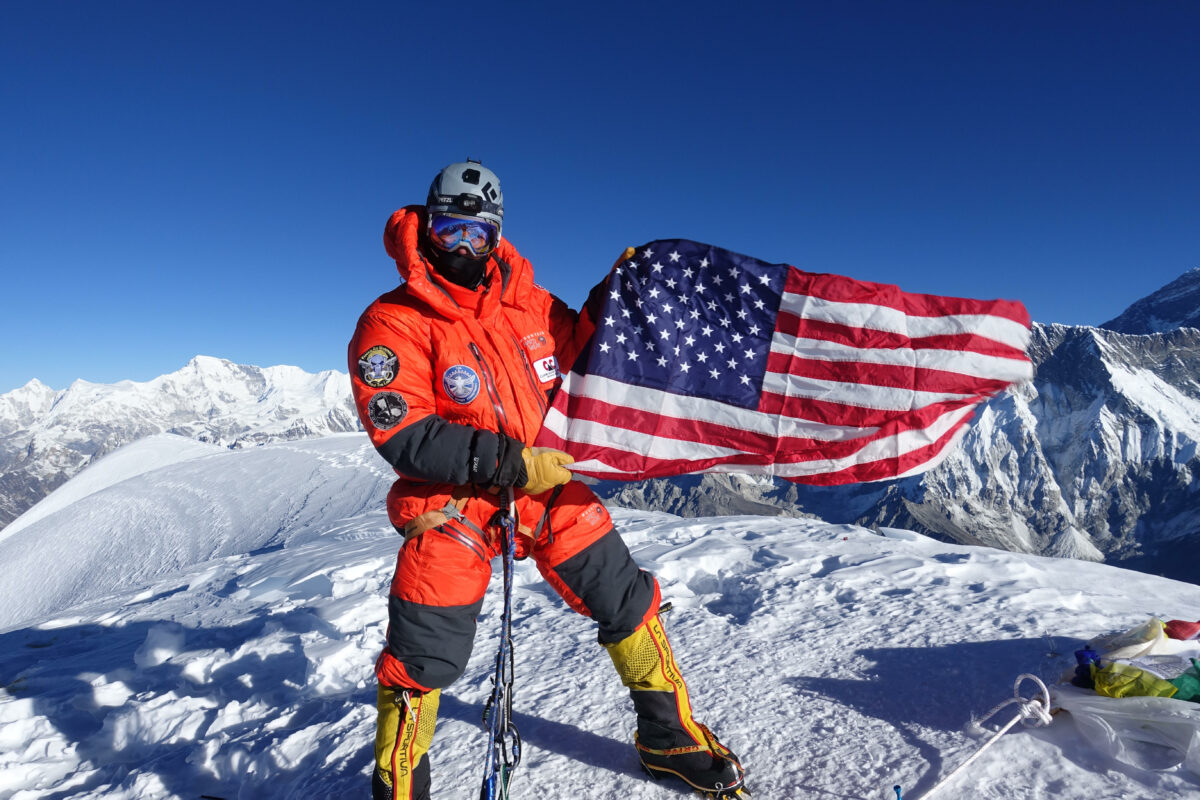 Mark Parella of Hermosa Beach stands at the summit of Ama Dablam, a mountain in Nepal, last November. Photo by Pasang Dava Sherpa

It was carved into a desktop in a junior high classroom in Holden, Mass.

Mark Parella was a seventh-grader assigned to sit in the old home economics desk in 1993.

He is now 42 years old and heads to Anchorage, Alaska, June 1 with a group of Nepali mountaineers to climb Denali, marking the 75th anniversary of diplomatic relations between the United States and Nepal – while raising funds for Cancer Support Community South Bay.

It is his fifth Climb Against Cancer, which has raised $13,162 so far.

Parella works as an agent for the Department of Homeland Security, based in El Segundo.

His first big mountain was Mt. Whitney in 2012. Previous peaks in his benefit program were Denali twice (did not summit), Mt. Everest in 2019 and (Mt.) Ama Dablam in Nepal last year.

This year is a third try at Denali. The first two were scratched by weather, for a mountain above the Arctic Circle known for its storms coming off the Bering Strait.

“We never got a summit window,” said Parella.

Raised in Massachusetts – Holden is a suburb of Worcester – he hiked, camped and climbed outside of town at Mt. Wachusett, elevation 1,996 feet.

“It’s a mountain, by six feet,” said Parella, referring to a minimum qualifying height for a mountain.

He later progressed to the Presidential Range in the White Mountains of New Hampshire.

“It gave us a lot of hope – that light at the end of the tunnel we needed,” he said. “It really helped.”

She recovered. The relationship did not last.

“And I wanted to pay it forward. The only thing I know really good is to climb,” Parella said. “Climbing can be seen as selfish. I didn’t want all the climbing world to be portrayed like that. I wanted to use it to give back in some kind of way to society.” 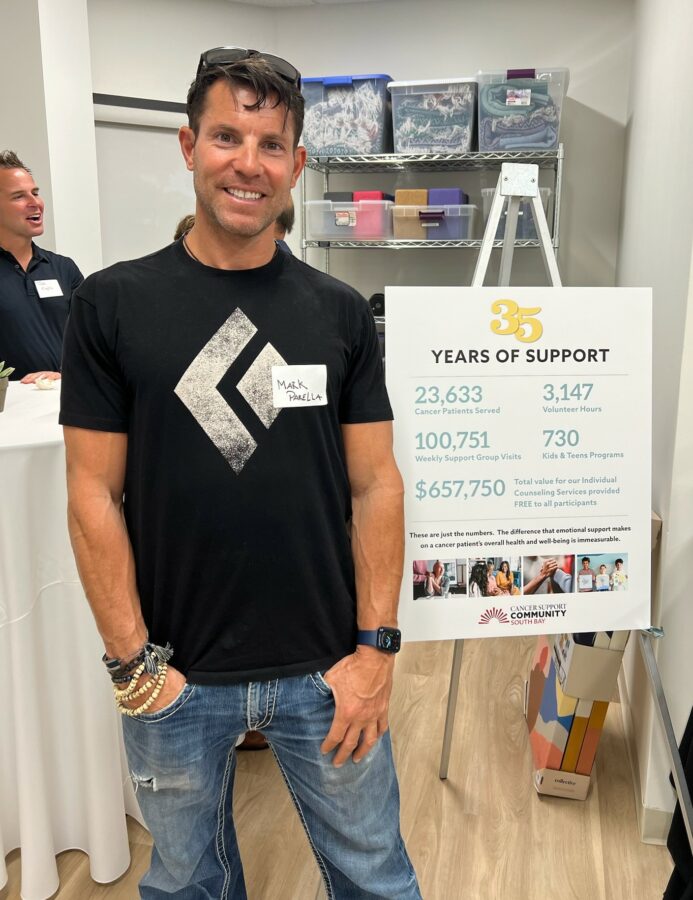 Mark Parella at a donor appreciation open house for Cancer Support Community South Bay April 22. Formerly based at the Redondo Beach Pier since 1987, the organization moved to Torrance earlier this year.  Photo by Tiffany Lin

Last week it was the stairs at Baldwin Hills Scenic Overlook in Culver City – two hours up and down with a 35-pound weight vest. On Tuesday it was two hours on the stairs at the five-story parking garage of Parella’s workplace, with 82 pounds of weight in his (climbing) backpack.

Two to three times per week, he drags a tire on the beach from the Hermosa Pier to the Manhattan Pier and back. It mimicks pulling a sled across a glacier.

It takes him an hour.

What is it that makes a climber?

“When you’re up there and you just feel truly free,” Parella said.

Cancer Support Community South Bay, in its 35th year, with its new name, is now located in Torrance. They have helped 23,000 patients. The organization offers free classes, programs and support services for anyone impacted by cancer, both patients and loved ones.

“I think he’s wonderful; that he continues to have these adventures and make us the beneficiary. We’re so appreciative,” said Theresa Plakos, public relations representative for Cancer Support Community South Bay. “We cannot thank him enough for making a difference in the lives of our participants.”

He flies out May 31 to Anchorage.

Once the nine-man climbing team gathers and provisions are set, an air taxi takes them to base camp, from which they will have a 21-day supply of food.

With good weather, it might take 14-16 days to make it to and establish Camp Four at 17,000 feet, summit on day eight or nine and get themselves and their gear all the way back down.

“I’ve learned that that mountain doesn’t give you anything you want,” said Parella.

So what if it’s Day 21 and the forecast for the next day is looking prime?

“We’re going for it,” Parella said.

One of them is Jangbu Sherpa, a veteran of 17 Mt. Everest summits and a claim to a record for the most time spent at the top without a shirt on (four minutes, 40 seconds).

A dream to live, as someone scratched into that desk. ER